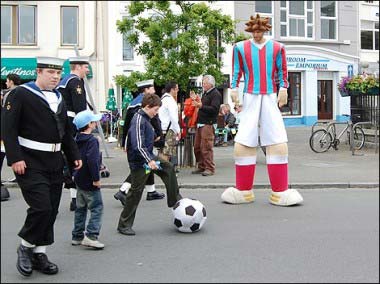 The Premier League is taking a break for a couple of weeks (the tears are real), but fear not, this weekend saw our favourite teams sign off in style with a tremendous weekend of football action.

Big Spending Manchester City (yes, that is their full title) brushed aside Liverpool 3-0 last week, but this week they travelled up to Sunderland and came back empty handed, losing 1-0 to a last minute penalty. The drama! Fear not City fans, there’s no need to worry, Roberto Mancini has worked out what’s going wrong:

‘if you don’t score, sometimes you can lose these games’

Phew, what a relief eh? For a horrible moment there it seemed like he didn’t realise that.

Down in London town, Spurs celebrated qualifying for the Champions League group stages by losing to Wigan at home. Yes, that’ll be the same Wigan who conceded 10 goals without reply in their previous two games. Oh dear. Needless to say, ‘Arry Redknapp was livid. Clearly his Spurs team can’t handle their celebratory champagne cocktails:

‘You should come here today and feel fantastic about yourself, not have a hangover or feel lethargic’

At times like these you need to go back to basics, get on the training pitch, start on the learner beers and just concentrate on not throwing up.

Elsewhere, Arsene Wenger renewed his love affair with North West as he took his Arsenal side to Blackburn, for a game of ‘rugby’. Now we’re not suggesting that Arsene is a purist, or that he dislikes long ball football, but, at a stretch, he might not be too keen on Blackburn:

But if he really does despise them, then you’ve got to give it to him, he hides it well.

And finally, Tony Pulis got all excited in the run up to Stoke’s game against Chelsea and slightly jumbled his football clichés:

‘We know how difficult it is going to be and they have started like a house on fire, so we are going into the lion’s den.’

Erm, something about a fire in a zoo?