Big Brother – some kind of eulogy 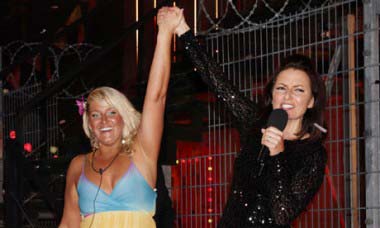 It wasn’t a vintage year for Big Brother, sadly. But there was enough there to suggest that it will be missed. If you’re assessing the highs and lows of the 2010 version, the lows might just edge it.

As ever, the best characters were pointed towards the exit far too soon – some by the traditional voting out method, others finding it far too easy to stomp out in the heat of the moment. Whatever your thoughts on them, the likes of Sunshine – who looked like Amy Winehouse after rehab – the Artful Squatter Shabby, and the toff Ben – who began the show in the grips of a weird re-imagining of Brideshead Revisited with Mario – they were all great contestants who were reintroduced to the real world far too soon.

Another major low was that the whole thing just takes too long now, and with a conveyor belt of new contestants repeatedly flooding the house, it’s near impossible to keep up. The fact that the graffiti nerd Sam Pepper wandered in and very nearly won the thing in the last couple of weeks makes a bit of a mockery of a once great show. The key is to watch people grow together, not to sit back biting your knuckles because a gobshite has just walked in and called Josie “fat” to her face.

Talking of Josie – the buxom milkmaid who makes women all over the world proud to be Bristolian – she’s one of the highs. For a terrifying moment there, it looked like that abominable brainless Corin might run away with it, despite seeming like exactly the kind of person who has a couple of drinks and starts using the “c” word, and having a curious new look, known in the trade of “Face off female bodybuilder, body off Baywatch”.

Anyway, yes, Josie was great. Quite definitely the nicest contestant there has ever been – all despite her weird love story with Scott Robinson chanelling the spirit of Alf Stewart. A worthy winner, her worth further increased when she decided that she didn’t fancy enduring the preposterous Ultimate Big Brother challenge, noting that “she isn’t like these people”.

A collection of broken celebrities clawing at the past, it makes for a truly depressing ending to a cultural phenomenon. Even if Chantelle manages to realise The Great Gatsby’s dream by rekindling her love affair with Preston, it won’t be enough to lift this one from the dredges. A hunch suggests that Gatsby’s fate is a more likely outcome – a figurative Big Brother funeral that no one turns up to.