And, hilariously, the picture is of a big football! 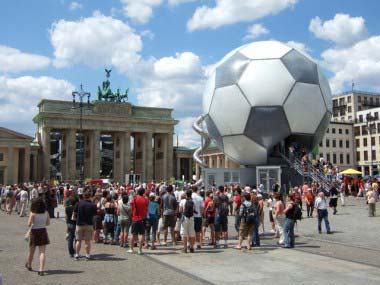 It’s only the second week of the new season and already the league has gone all six factor on us! Yes that’s right, it’s all about the joy of six! WINK. This weekend, top footballers have been enjoying some six-y time! Anyone bored of these tabloid puns yet? OK, well basically there were a lot of 6-0 wins this weekend. Comprendes?

So with Arsenal, Chelsea and erm, Newcastle all romping to empathic 6-0 wins, three lucky managers were left with the unenviable task of facing the post-match cameras and trying to think of something vaguely clever or positive to say.

After an absolutely drubbing against Newcastle, Villa’s caretaker manager went for ‘It was a very disappointing result’. Just to confuse us, Blackpool’s Ian Holloway shot with ‘I’m not that disappointed to be honest.’

But the Alastair Campbell prize for spin goes to Roberto Martinez who claimed he was ‘delighted’ with some of Wigan’s play before acknowledging:

Yes, yes it does Roberto. But nice try.

Elsewhere ‘Arry Redknapp has been heaping big loving spoonfuls of praise on Gareth Bale after his two goals against Stoke this weekend. And true to form, ‘Arry has no problem taking credit for helping him to improve. Apparently these were his fortune changing words of wisdom:

‘C’mon Gareth, stop messing about with your hair’

If only he’d managed David Beckham earlier in his career. That boy could’ve really been someone.

And finally, over at Fulham they’ve gone to extreme lengths to stop Mark Schwarzer leaving for Arsenal. According to young David Stockdale, they’ve only gone and buried him!  Rather embarrassingly, he now appears to be a bit stuck:

“I was just trying to get the lads out of the deep muck. It’s hard enough trying to dislodge Mark Schwarzer at the best of times but I’ll just take it day by day now and see what happens”

Sorry Arsenal fans, looks like you’re stuck with Almunia for a while yet. Snigger.