It’s back, and it’s still funny! 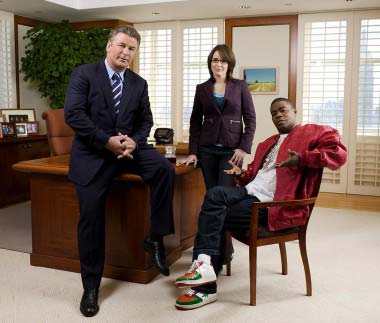 One of the few perks that comes with working on a website viewed by a handful of people – presumably most often stumbled upon when the quest for something kinky takes a rather unusual turn – is that from time to time, we get sent things to have a look at, and then review. Most recently, the latest series of 30 Rock. Or, to be more specific, the first four episodes of the latest series of 30 Rock, which are set to air on Comedy Central in the next few weeks. As everyone knows, freebies are never bad, and in this case, they’re pretty good.

Of course, the actual receiving of these clashed with some unusually warm weather, so there was a choice to be made: stay in and watch them, whilst the rest of the nation removed their outer layers, ordered a few bottles of the sweet stuff, and lay about on any spare cubic metre of grass going, lovingly folding flat spheres of salami into one another’s mouths. Or join the nation in slowly baking on a stretch of turf, whilst simultaneously promising to watch the thing in bed. And lo, Option 2 became a reality, and episodes one to four were enjoyed way past bedtime, and through slightly blurred vision.

Even so, Interestment is happy to report that it’s business as usual from Tina Fey, Alec Baldwin and the rest, as the show continues to plug the void left by Friends as the hip US sitcom most likely to run and run, without too much of a dip in form. Those who have been with the show from the beginning will be all too aware that the gag-rate has been upped with each passing season, and this one continues to throw out the funny stuff with machine gun precision. Baldwin is on his usual magnificent form.