The final three are finally through and finally the end is in sight. 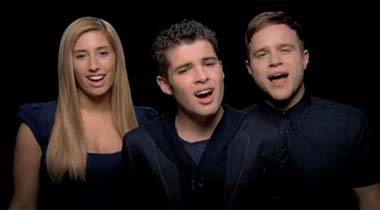 After a Saturday night round of Jacko numbers, the votes were cast and Danyl of the Dead Eyes is out of the competition and back to amateur dramatics and PTA meetings with parents who are all now a tad more self-conscious in the knowledge that their child’s drama teacher is festive. The Cowell delivered a heartfelt eulogy at his departure intoning: “Danyl is a… graceful (gracious?) …[PREGNANT PAUSE]…loser.”

Olly top-button-fastened Murs was the first to be granted access to the finalists podium, despite resembling an extra from A Clockwork Orange that had mislaid his bowler hat. He did a lovely version of Can You Feel It and in round two did his special-needs dance with energetic aplomb. Doubtless The Cowell had gotten a whiff of its cute originality and issued the command: “do it to death” so that it was immediately rendered irritating.

Joe “get Lloyd-Webber on the phone” McElderry did two slow ones for the hell of it as clearly he’s going to win. His mentoress The Cole smiled on, delighted that she wouldn’t have to exhaust herself with fake enthusiasm for Lloyd this week.

Stacey “what’s a wedding singer?” Soloman’s performance of The Way You Make Me Feel was clapped at by Mentoress Joan Collins, but is losing favour with The Cowell.  ‘You have been given too much to do,’ he smarmed, rolling his eyes for the fiftieth time that night, in reference to the strenuous demand  that she move and sing simultaneously (which appears to be Stacey’s Achilles heel.)

The best bit was when they announced that she was through to the final, and she stared at Joan Collins as if she had been asked to translate The Aeneid from the original Greek.