This is almost certainly the best game in the world… 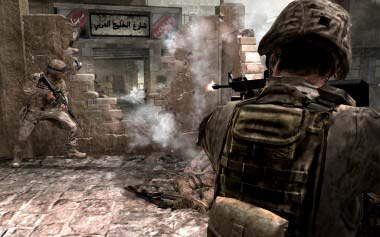 Want to recreate police brutality at some sort of hippy protest? Easy! Stove someone’s face in with a riot shield. Want to machinegun a crowd of civilians at an airport? Not a problem, you get to do that too (although after the controversy about this, we should probably say we don’t support that decision and fully recommend that you skip that level otherwise you’ll a) be scarred for life and b) immediately leave your house, buy a gun and recreate what you saw in the real world). Want to shoot a guy in the dick? Whoah, stop right there. You NEVER shoot a guy in the dick dude.

As with COD4: Modern Warfare the single player is pretty good. It’s about six hours on regular difficulty and the gameplay is varied and entertaining, but like the original game the real prize here is the multiplayer. Put quite simply: it rocks. There are sixteen maps varied from frozen Siberian wastelands to Middle Eastern Cities and fourteen game modes (Including three third person perspective modes!)

Multiplayer is faster and more furious than before with customizable kill streaks and the newly introduced death streaks. There are loads more kill streak options now too – you can pick three from a list of fifteen (including Harrier strikes, automated sentry guns, AC130 attacks where you control the gunner and even a tactical nuke which immediately wins the game for your team. They’ve also introduced a last kill replay that everyone in the match gets to watch at the end of the round. This shows the kill that wins the game in slow motion which can be pretty embarrassing if it’s you getting knifed in the face.

Levelling up is done in much the same way but the extra bonuses that pop up on the screen (e.g. for headshots, for long range shots, for revenge kills, for rescuing a team mate etc) give the game a more arcade-y feel and mean that you are constantly unlocking emblems, titles, guns and perks almost every round.

There are a couple of small issues here. Party chat isn’t allowed in the majority of game modes (incidentally every single time we’ve played the game, the majority of players seem to be Liverpudlian children talking about skipping school tomorrow to play more – it’s somehow much worse when you know the character repeatedly blowing your legs/arms and torso – NOOOOOOOO not my beautiful torso! – off with semtex is actually a 13 year old child!) and the sheer volume of kill streaks can get pretty ridiculous if your team are losing heavily until the point where you can’t leave a building without being butchered by a Harrier or smashed into the ground by a Predator missile. There’s also a big petition from PC users regarding the loss of Centralised servers, the console and the 18 player limit for online games. To be honest, these don’t really seem like valid issues as the peer to peer server system works pretty well and the maps are designed for the smaller nine player team sizes.

These issues don’t really detract from what is an excellent sequel following on very nicely from its very hard to beat predecessor. Hopefully this game will maintain the same rabid following that COD4: Modern Warfare had and there will be a good couple of years of play to be had from this one too.