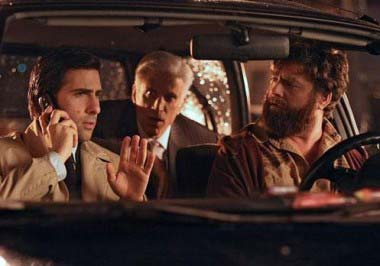 We love hearing about great new television shows that we should watch. Mainly because we’re living in a wonderfully golden era for the small screen, with knockout programmes like The Wire, Eastbound and Down, In Treatment, Curb Your Enthusiasm, and It’s Always Sunny In Philadelphia seriously floating the Interestment onions in recent months/years. Compare that to just a few short years ago, and you’d be hard pushed to find anything beyond The Sopranos that was worth wasting an afternoon on. Most of this is thanks to HBO, which must now surely be the natural home of brilliant comedies and dramas, even when up against the big cigar-smoking suits who run things in Hollywood. And the latest treat to come oozing out of the shiny HBO think tank is Bored to Death – a show about a frustrated writer who fashions himself as a private dick on the side. We were tipped off to this by great friend of the site Mikey – aka Open Mike – who cheerfully pointed out that it stars two massive Interestment favourites: Ted Danson, and Zach Galifianakis. “Seriously, you’ve got to see it,” he told us, slurping on a pint of the sweet stuff, “I think it’s one for the future”. So, there you go. You heard it here first, people. Or, like, third. Here’s a little teaser: