Some Great Games for your iPhone! 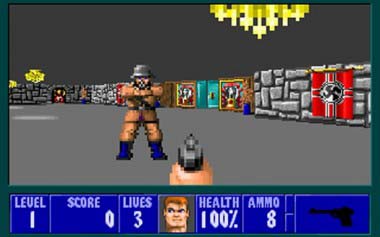 Do you remember the good old days that publications such as the Mail keep talking about? Days before all the nasty violent games we have now? Yeah, they never really existed, but it seems that as games developers are out of new ideas, it’s time to reissue all the old games on the iPhone. Not that we mind, as there were some awesome games back then.

Here are our top 3 new-old games for the iPhone:

MEIN LEBEN! I know that loving Hitler isn’t hip any more, but how about giant robot Hitler? This is pretty much a straight port of the original game with all the episodes/levels. The controls are optimized for the touch screen and work surprisingly well. If you enjoyed killing Nazis in ’92, we can pretty much guarantee you’ll enjoy it in ’09.

The graphics/audio have been revamped (although you can swipe the screen to revert back to the original glorious 16 colour EGA, Midi sound and a much less shit haircut for Guybrush) but the gameplay has been kept the same with a great touch screen control system and all the original dialogue.

Beneath a Steel Sky

Another point and click adventure game, this is presented exactly the same as the PC version but with some nice additional cut scenes from Dave Gibbons (that’s the Watchmen dude for all you non comic book geeks).

The best thing about these games is that they have medium to long-term playability. So many of iPhone games are fun for 5 minutes but lack depth. Even though you may have played these titles before, there’s something really satisfying about rediscovering them again on a new platform.

And here are 3 more that we want to see:

Don’t know how much Apple would like the senseless mowing down of hundreds of civilians with miniguns, but this would be awesome for the commute to work.

Sam and Max Hit the Road

It’s just a matter of time until this gets released, now that Lucasarts have released Secret of Monkey Island, but we can’t wait to see our favourite dog and rabbit detective team back on our (tiny) screens

Mainly just for the music but the game itself was super sweet too. Who could argue with a Kiwi bird gassing a grandmother riding a flying goose balloon with a magic wand? No one, that’s who!