This, Louis, is Gummo 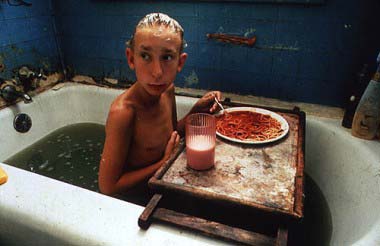 It was movie week on the X Factor, but sadly our hopes that this would translate into a three hour word-for-word remake of The Deer Hunter, with the twins playing Meryl Streep to Lloyd’s De Niro, whilst Stacey stepped up and gave a harrowing performance of Christopher Walken descending into russian roulette madness were dashed when Simon reminded the public that it’s a singing competition. Gutted. We were particularly looking forward to seeing Danyl attempting to interpret the mood of a grumbling Pennsylvanian steel worker. Either way, it was another great outing for the show, which started with Dannii dressed up like she was off to the Oscars, with only her hurried scraped-back hair that looked like she’d just had frenzied sex letting her down. It ended with Simon proving that this isn’t a singing competition at all, as he saved the twins. In the middle, it went a little something like this… 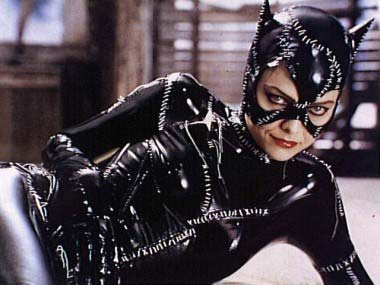 Stacey opened the show. We’ve already established that Stacey always takes to the stage as if she’s just emerging from the most spectacular makeover, and that she appears to have seen a ghost whenever she breathes. Something else that we noticed this week is that whenever she says a sentence – any sentence at all, even boring ones – she does it in the manner of someone telling a rude joke for the very first time. She has a very strange manner. Anyway, muddled personality traits aside, she sang Son of a Preacher Man by Dusty Springfield, whilst dressed as Catwoman (pictured). As Simon declared that he really wasn’t feeling it, we were too busy wondering if the vicar’s boy was the one who put a baby inside her. Does his dad even know about this love child? So many questions. Lucie finished it off for the girls with a song called Camp Rock – probably inspired by Joe’s performance last week. She’s so boring, that Lucie. So boring that we barely heard a word of her song, because we were too busy examining the razor-blaze cuts on her trousers, and wondering if we might catch a glimpse of blood. But no, fashion trumped self-harm, and she was eventually given the boot after the sing off. Like Rachel a couple of weeks ago, she attempted to win over the public by pretending to be Stacey in her post-song interview. It never works. We know that now. So stop doing it, everyone.

Olly was back in his rightful slot as the opening act for the Over-25s. He sang Twist and Shout, as featured in Ferris Bueller’s Day Off – Simon’s favourite film. He also incorporated a bit of the Thriller dance, which we can only assume was a sly dig at the surviving Beatles, who are probably still feeling a little bit sore about Michael Jackson cashing in on their back catalogue. Paul and Ringo would be spinning in their graves. Were they the dead ones. Next came Jamie Afro who decided to do a song from Gummo – which, for those who haven’t seen it, is probably one of the weirdest, most uncomfortable films ever made. His song came from a bit where a couple of inbred looking characters are murdering a cat. Even so, everyone seemed to like his performance, although Louis was a bit miffed because he hadn’t heard of the film. Louis, count yourself lucky, and shut the hell up. Danyl did Purple Rain, standing on a giant coffee table, surrounded by pretend ice, like he was skulking around a Polar Bear’s house. He wasn’t as good as Ruth Lorenzo last year, when she sang the song and blew everyone’s minds. The general consensus is that people don’t seem to like Danyl because he’s a bit too good. He’d be wise to start butchering songs with increasingly insecure performances. Then he can become arrogant when he wins. Seriously. It worked for Will Young. 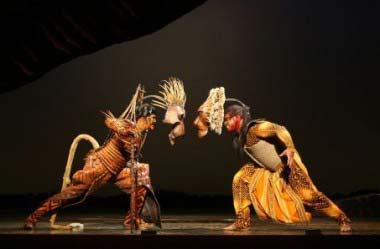 The boys came next, with Lloyd continuing his trend of being watery and forgettable. To the point that we wouldn’t even remember his performance of Stand By Me, had we not jotted down a few notes. One bit says “Lloyd is shiiiiiiiit”, whilst another says “he sounds like someone doing a prolonged Welsh impression, which veers into Indian, then culminates in Jamaican”. We have no idea what that means. We were probably drunk. Then Joe wrapped it all up by having a crack at The Lion King (pictured), which revealed two things. Firstly that Joe can really sing. And secondly that it’s the height of rudeness to describe a performing singer as “a bit musical theatre”. In conclusion, he’s the young Michael Ball. 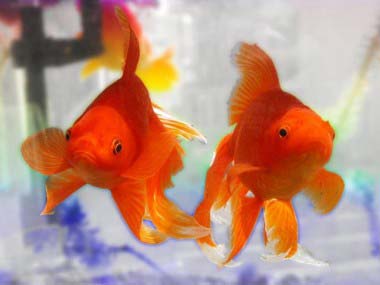 And finally, John and Edward, now known as Jedward – which they kindly explained, is an “abbreviation”. We love abbrevos. They too inserted a bit of Thriller into their rendition of Ghostbusters, which was predictably awful/brilliant. We noticed that there’s something rather fish-like about the twins – you could almost imagine them swimming around in a goldfish bowl, with their magnified heads scraping up the side, smiling gormlessly at you. Or it might be that we’d moved on to sniffing glue.