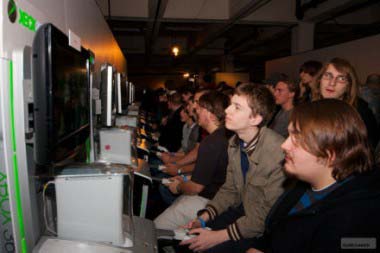 Casting your eyes around the Eurogamer Expo which took place in London this past weekend, you’d be forgiven for thinking that videogames appeal to a specific kind of demographic. There are lots of haircuts here, pastel shades and worn out running shoes. There are girls, but they’re mostly skimpily dressed reporters for obscure internet TV shows, or booth babes employed to drape themselves across 42” screens. The vast majority of my vista is made up of teenage boys with backpacks who happen to be blocking my view of an Xbox 360 game that I really want to see.

The Eurogamer Expo is an industry event designed to raise awareness and excitement levels for a whole bag-load of videogames which are set to come out in the run up to Christmas. Old Billingsgate on the north bank of the Thames is taken over with LCD screens of various sizes, consoles are stuck under them, and people are allowed to wander about whooping and chest-bumping with delight at the ensuing audio/visual extravaganza projected into their eyes. There are also a number of keynotes by developers and publishers (most of which appeared to be held in the venue’s attic), and a career fair. This year, the latter was predictably occupied by 16-year-olds who wanted to be games journalists, while the former included an interesting presentation by the developers of leftfield PC game, Darwinia. Essentially, the event is hugely loud, visually distressing, largely annoying and guaranteed to give you a massive headache.

While I could list off a number of big titles that were on show, and are inevitably set to provoke parental stampedes at your local branch of Game, of far more interest was a little haven called the Indie Games Arcade. Run by an organisation named Pixel Lab, this section boasted a number of titles which were produced independently, free from the shackles of publishing behemoths such as EA or Microsoft. While blockbuster games like God of War 3 and Heavy Rain had people frothing at the mouth and jostling for position in the event’s main area, the comparatively secluded indie arcade was frequently joyous in its content. A particular mention goes to a game called Eufloria (below), which appeared to be some kind of planet-colonising simulator complete with little insects, trees and lots of zooming in and out. It was the most compelling thing I played all day.

As Apple’s democratising App Store does an increasingly thundering trade, Microsoft and Sony’s download services full of casual games become more popular, and inexpensive simple games cast their addictive little tentacles outwards, so-called indie releases suddenly feel like they have a place. Gaming’s backpack-brandishing core demographic may continue to cling to the multi-million pound productions which glisten their way into living rooms nationwide, but – despite its propensity for  big-budget populism – the Eurogamer Expo happily demonstrated that indie games are here to stay.

One Response to The Eurogamer Expo, reviewed!