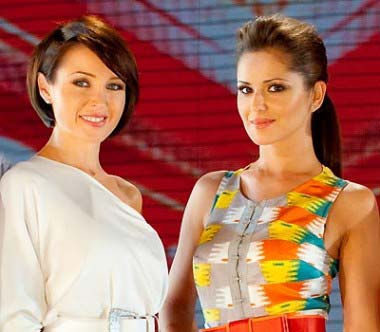 Believe it or not, but there was a time when beautiful women were allowed to be friends. Actual friends. Not just friends to each other’s faces, who secretly loathed and wished gross disfigurement on one another. Bona fide friends. Look at the popular television series Charlie’s Angels – they were great pals. We can’t recall a single moment when Farrah Fawcett looked Jaclyn Smith up-and-down, kissed her teeth, and mouthed something to Kate Jackson about how she didn’t realise it was whoring season. Those girls had each other’s backs. But, unfortunately, those days are gone, we’ve all been slapped by the wet hand of cynicism, so when we spy a couple of gorgeous women thrown together on television, we assume an Alexis Colby/Krystle Carrington passive-aggressive meltdown, which will either lead to violent outbursts by outdoor ponds, or frenzied lesbianism. Or, in the case of Dannii Minogue, a refreshingly honest account of her friendship with Cheryl Cole in the UK’s number one low rent celebrity newsletter, OK! magazine. Showbiz ears have been sharpened for months, waiting to hear the truth, and now it’s out there: Dannii and Cheryl are not best friends. They have a working relationship, but they don’t sit long into the night eating ice cream, practicing french kissing, and moaning about bloody men. They are, for the most part, normal. Of course, this has sent showbusiness desks all around the country into a feeding frenzy, as they attempt to ignite a flame of raging rivalry on what is just a damp squib. One journalist in particular appears to be filled with glee as he rather dramatically describes their relationship as “frosty”.

In other important celebrity news, Kelly Brook (below with her boyfriend) is going to take most of her clothes off on stage, and rendered the planet agog by wearing a dress that contoured her much-celebrated figure. And Kanye West has removed a video of him having sex, then sicking up blood from his website. 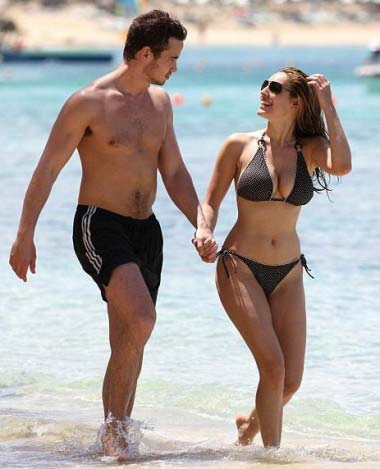