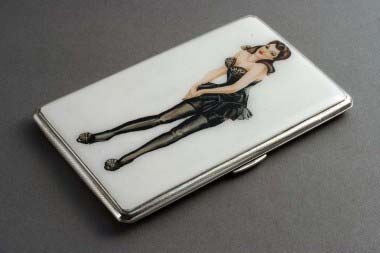 What with this whole recession malarkey, it’s hard to remain demure. Where once we could all wear a new suit for each working day, now we’re on a one-suit-does-all programme – be it a wedding, a funeral, a night at the theatre, a job interview, a James Bond theme party, a Coldplay gig, or you just enjoy lounging around on a lazy Sunday wearing a suit. It’s hanging in the closet/wardrobe/bannister, lonely, charcoal grey, very much lived in. Even underpants now have to be washed, rather than thrown out after one use, and cars are no longer seen as disposable either. We’re all on the bread line, damn it. These are dour, cruel, vicious times. Which is why we now feel the sweet caress of hopefulness whenever we catch wind of a magnificent bargain. Just this morning, friend of the site Joe stumbled across a very shiny, demure find in his local Be Kind to Prostitutes – or some such. “I’ve been forced back onto roll ups since I lost my job,” he told us, taking a sweet inhale on a prearranged smokey joe, “and I think they look a bit trampy, so when I spotted a cigarette case going cheap, I snatched it up – this way I can pre-roll a load, then store them in a sexy holder.” He continued to explain that this made him feel good on the inside, like he’d won a bit of his soul back. And why not? It’s always nice to add a bit of sparkle to your bad habits. So come on Joe, how much for this rather erotic piece? “Two quid”