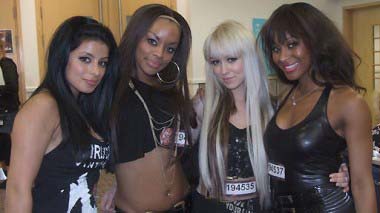 It was a strange opening night for the live X Factor sing off. Everyone seemed a little bit tetchy, especially Cheryl, who might have been dressed up like Tinkerbell, but looked like she was sucking a lemon whenever Simon opened his mouth in the next door seat. If we didn’t know the entertainment industry better, we’d think that a bad mood, and a groggy head might be marring her professionalism. Not a very happy bunny. To make matters even worse, Simon had overdosed on stupid pills, explaining to one contestant that he had “misunderestimated” her, which isn’t even a word, hence means exactly nothing. And Dannii thought that she’d try her hand at publicly outing a talented young could-be-homosexual, rather than allowing the fact that he’d just thrived under the spotlight singing one of the most womanly songs imaginable to paint that particular picture instead. It was all rather awkward, and for once, it was Louis Walsh who came away from the show unscathed. Performance-wise, you couldn’t get a more mixed bag if you decanted a big packet of Revels into a box of Quality Street. 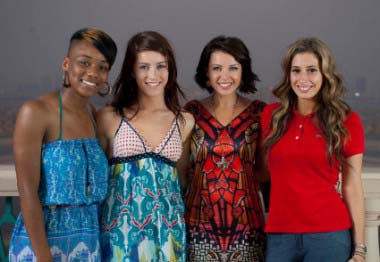 The girls had a fairly strong night, which was kicked off by Rachel, who revealed that she’s skipped going to university for this. As taking a year off goes, it mightn’t be the greatest move, as she looks an unlikely winner. Still, once booted off around week two/three/four, she might be able to muster the coins to head off to South East Asia, to sing accompanied by bongo beats with a load of posh kids with dreadlocks, who think there’s some kind of irony in meeting someone who was on X Factor. There isn’t by the way. At this moment in time, she doesn’t seem to have the added sass to remove her from beneath the Alexandra Burke shadow, and the X Factor public tend not to vote for the same category two years in a row. Stacey probably shaded a rather better night of it with her shaky acoustic interpretation of Coldplay. This was seen as a daring move, pitching a Chris Martin number to a girl who lacks the songwriter’s earnest intensity, but the judges all seemed wooed by her ditzy personality. She has a child at home. Lucie, meanwhile, further explained for the umpteenth time that she comes from a really tiny Welsh village, which is now beginning to suggest that everyone in the village just goes around explaining their living arrangements to one another. Her conversation strategy needs a rethink. As perhaps do her song choices, as she took on a Leona Lewis number, which seemed like a weird choice. She didn’t quite have the lungs for it. Nor did she have the crisp hairsprayed locks to handle the wind machine. At one stage it was like watching the Yeti. 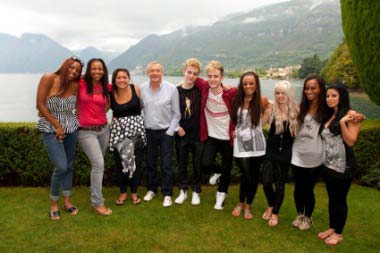 The groups followed the girls throughout the night, and first to face the judges were Kandy Rain – the troupe of strippers, who appeared on stage dressed like, well, strippers. “They’re sexy, sassy and I know they’ve got what it takes,” declared Louis, shedding no light whatsoever on what it is that they’ve got what it takes to do. Strip? Certainly at least two of them had quite a bit of buttock showing, whilst the one on the end might as well have just got them out. Pre-watershed viewers were clearly dismayed by this and they got the chop. Next up, Miss Frank further threw down the gauntlet as the band to beat, with every member outsinging the solo girls. They’re actually brilliant. So brilliant that we want them to win. They won’t though, because they’re a group. People hate groups. Then John and Edward came along, couldn’t sing, danced like they were practicing in the garage, and everyone unanimously jeered them like they were a couple of Irish cocks dicking around on stage. They shall be the new Milli Vanilli. 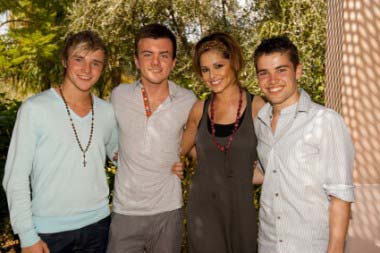 For the boys, it was a relatively bad night. Rikki looked like a lower level Droog in A Clockwork Orange, and the big revelation for the night is that he struggles to sing and keep his eyes open at the same time. This could, of course, prove to be fatal should he ever have to perform a big choreographed number. Simon hated him, we thought he was a bit creepy. However, Lloyd was particularly bad, like a young Tarzan seized from the jungle, shown three minutes of Justin Timberlake, then shoved on stage to repeat what he’d just seen. It was by far and away the most awkward performance of the night, and yet the judges seemed to like it. In Tarzan-terms, this might simply be because they knew that any show of dismay could shortcircuit his barely-developed brain, and result in him lurching through the audience, swinging his fists, howling at the moon. We just don’t know. While Joe startled everyone by declaring the X Factor house to be “the kind of house that Katie and Peter would get married in”. What was he thinking? Has he not heard the crippling news about that particular fairy tale? So tactless. Either way, he sang No Regrets by Robbie Williams quite excellently. He’s one to keep a very close eye on. 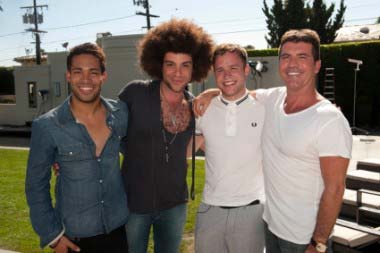 And so to the elderly gentlemen having a final stab at the fame game. Olly, 25, kicked things off by singing Robbie Williams, She’s The One. The performance began with him sitting on a step, engulfed in dry ice – presumably a nod to Apocalypse Now – before rising to his feet and sounding not-dissimilar to Robbie himself. The judges liked it, we were glazed over, Dannii said something about everyone working on the show wanting to be Olly’s friend. He should go far. Jamie took a very strange decision, and attempted to make T-Rex sound current on a Saturday evening TV show for kids. If this carries on and escalates, he might end up screaming Deep Purple songs at a confused studio audience. Simon liked him a lot. Cheryl thought that she could spot doubt in his eyes, even though she was twenty feet away. She presumably also saw an ant in his hair. Wrapping things up was Danyl, who belted out a ladylike classic, before all-bar-Simon decided to attack his cockiness and raise eyebrows about his sexuality. It was all rather reminiscent of Sharon Osbourne having a weekly crack at Steve Brookstein. And we all know what happened there. He won. Then disappeared. And now possibly paints radiators for a living. Good luck Danyl.