Interestment Television: Get Up Stand Up 2!

Another night to savour… 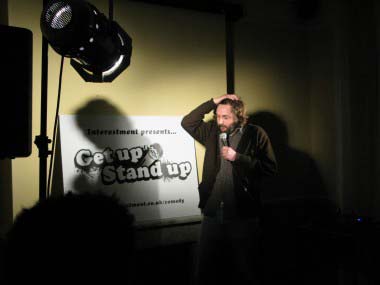 Just last Friday, we enjoyed the second of the monthly Interestment comedy nights, and what a night it was. After yet another couple of sleepless weeks, wondering whether anyone would bother turning up to a slightly off-the-beaten-track pub in Clapham, we were delighted to see gorgeous people flooding through the doors to take in an evening of fabulous funny stuff upstairs, and dusty old records downstairs. It was a great night, only slightly marred by the sounds of a pirate radio station quietly buzzing through the speakers. But thankfully, great jokes trumped muffled grime music, and a fantastic time was had by all – especially the man from the BBC, who was filming the thing for a report on the BBC London News, which will be hitting television screens next week. With a bit of luck, we’ll get a copy of the feature for the site.

Comments after the show included: “I honestly thought I was going to be sick with laughter”, “amazing!”, and “seriously… amazing”. See pictures from the night here, and there’s a great clip below.

Big thanks to all of the comedians who made it such a wonderful night – Tim Shishodia, Elena Procopiu, Christian Ancliff, Ola Aralepo, Hannah Isherwood, David Wain Heapy, Alex Marion, Luke Stephen, Michael Mooney, and Joe Wilkinson. And an extra big high five to Lloyd Griffith, the fantastic MC, who did a blinding job, and appears to be making quite a name for himself with the gentlemen who run FHM.

The next Interestment Presents… Get Up Stand Up is taking place on November 6th. GET YOUR TICKETS NOW!