The Imaginarium of Dr Parnassus, The Premiere 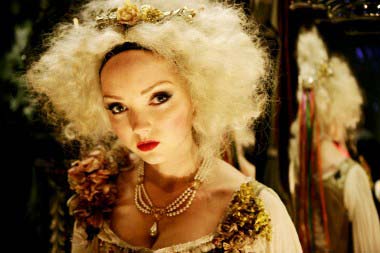 Terry Gilliam clearly likes Mescaline on his Corn Flakes and Laudanum in his tea if last night’s premiere of The Imaginarium of Dr Parnassus is anything to go by. That man’s head is ruined, I tells ya. Ruined! Too many years with that odd Python lot, methinks. The film is totally weird, but rather brilliant, and due to the terrible timing of Heath Ledger’s decision to wolf down medication and have a nap, the script was tweaked to allow for three more actors to play the role of Tony. Namely Jude Twerp Law, Colin Fiddle-dee-dee Farrell and Johnny Ladykiller Depp. That’s an awful lot of eye candy for the female viewers – or for those well dressed boys who like to kiss and cuddle other boys. Homosexuals, they’re called.

The premiere brought out Lily Cole – a very tall model, with unfeasibly large boobs for a lady of her size. One scene had the entire cinema gasp in unison as it appeared that they’d magicked Jordan’s chest onto Lily’s skinny frame, Verne Troyer, who, believe it or not, is surprisingly shorter than you’d think. You’re expecting toddler, you get baby. It was especially noticeable when I almost tripped over him on the red carpet whilst he was on some kind of small go cart wheelchairy device. Tom Waits – who plays the devil brilliantly – was there, looking much like an older version of a young Tom Waits. Paloma Faith, who has the biggest mouth in the world bar none, was seen swishing around the place. She’s some sort of singer thing. And, erm, Latoya Jackson was spotted skulking about.

Sadly, the hot boy club failed to show, but were rumoured to be at Sting’s party at Proud Camden trying to save some trees in a forest or something stupid. RIP Heath, your last film was pretty good, but your Laaaandan accent was a bit, well, crap.