News from the papers…

What have those daily pamphlets been saying? 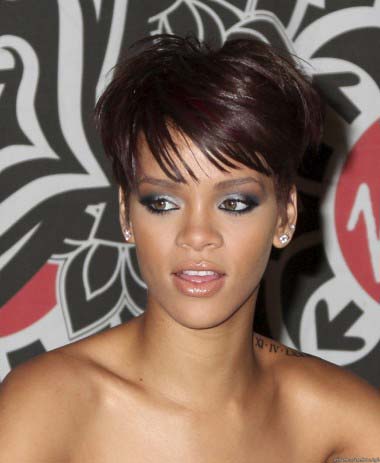 CelebLand is packed to the gunwales with uplifting tid-bits: The Spice Girls are not re-uniting (again), the Backstreet Boys have swine flu, Stacey and Rachel X-Factor have been spotted buying loo roll for the communal bogs, and Simon Cowell’s  100 per cent taste-free 50th birthday party featured an inflatable vagina and a drunken Jordan.

Fashion: Po-faced food dodger, Trinny off-of Trinny and Susannah was spotted canoodling with a man (not Susannah) who  – irony of ironies! – was dressed really badly.  Speaking of which, the usually gorgeously attired Rhianna (pictured) wowed Paris Fancy Dress Week in a minidress, accessorised with safety glasses and waders. FAIL.

Home news: in an un-surprising poll, the UK has been voted the 21st best place to live AFTER Norway (a country only famous for A-ha, hand cream, and cheese for breakfast),  Belgium (which is BELGIUM for crying out loud) and Iceland . Given Britain’s current economic situation, it’s likely pollsters were referring to the frozen-products superstore.

Tech news: Microdaft urged users of hotmail to change their passwords yesterday after hackers posted over 10,000 usernames and passwords on the net.  Perhaps this massive, instantaneous rush to log on caused the crash of French First Lady, Carla Bruni’s website two minutes after going live. An inside source from the French Political Tech Advisory Office refused to comment, as he was smoking endless cigarettes on a four hour lunch break (probably).

And finally: After losing 6.6 billion of weapons and equipment down the back of the settee in August, the Ministry of Defence decided to go for a stupidity Gold Medal after its Internal Guide to Avoiding Leaks was leaked yesterday.