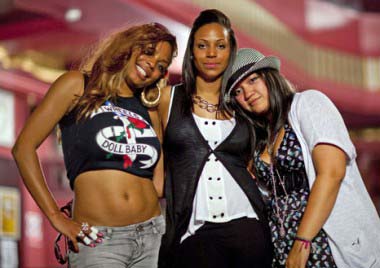 Once again, it was a hugely emotional X Factor weekend. Cheryl freaked out a bit before telling the opera boy to get off her land, Simon and Louis remained relatively stony faced throughout, and Dannii Minogue once again resembled a robot pretending to be human, as a film of salty tears sheened her electric blue eyes, but never actually fell down her replicant cheeks. Time. To die.

It was exciting stuff. Cheryl took her great looking boys on a rather eyebrow-raising trip to Morocco with Will Young, which sent local gaydars into maximum overdrive. Louis enjoyed a well earned break in a place called Lake Homo with Ronan Keating – a former pop singer with Tom Cruise intensity. Simon jetted back to LA, to be reunited with Sinita – who thought it would make for a hilarious introduction/ice breaker if she basically took all of her clothes off, and made everyone feel slightly disturbed and uncomfortable. And Dannii went to Dubai with Kylie, who now sounds a little bit like Harold Bishop when she speaks. Whilst most of the contestants chose to fill their days sitting next to garden statues, or staring thoughtfully out of windows, the girls took the opportunity to swim with dolphins! Great.

Will Young provided a looming presence in the boy’s camp, as he sat half-grinning, like a cruel professor listening sarcastically to a toddler attempting to decipher an equation. His only useful summation was to suggest that he’d consider rogering Ethan, but only if he didn’t sing. And lo, Ethan got the chop. As did the fey opera singer, and the soft spoken soul guy, Duane. Hence going through, rather surprisingly, are the creepy child star from Scotland, whom Cheryl swamped with weird cod-psychology – “… you look like you believe, but deep down, do you believe?… I believe… now you have to believe… ” – leaving us wondering whether Cruise might have notched up another one on the big Scientology bedpost. The blonde boy from the Blue Lagoon has been ushered into the fold to be ripped to shreds by Cowell – he won’t last. And Joe, the Geordie lad, who looks a bit like Cheryl Cole in drag, made it. He has something of the Gareth Gates about him. Minus the unbelievably tiresome stutter.

Over by the lake with Louis, it was an awful turn out. De-Tour – a pair of earnest northern lads, both of whom resembled the exact result of what would happen if Dermot O’Leary and Jamie Carragher mixed sperm and impregnated a customer service officer, then waited twenty years – didn’t make it. The singing HR girls shouldn’t even have bothered, and Harmony Hood can go back to folding up clothes in Topshop. Hence, through went the singing strippers, who don’t want to be known as just a bunch of strippers, which is precisely why they will keep telling you that during every interview between now and two weeks time, when they’re booted out and accept an intriguing offer to strip for Nuts/Zoo. The hideous Irish twins, who are like Bros, only really bloody awful. And Miss Frank – who are either doffing a slightly unnecessary cap to Anne Frank, or poking fun at a Chelsea midfielder – made it, and look like ones to watch. They’ve all got strong Mary J type voices, and the little gobby one can RAP. Kids love rap.

Back in Minogue HQ, things were pretty intense, as she went about casting people aside in what looked like a hotel lobby. The humiliated losers included Stacey McLean, who might be wise to give sun-beds a wide birth for a while, the jazz singer one, who totally balls’d up her lyrics, and one girl who seemed to think that winning the X Factor wouldn’t only help her career, but her entire family’s careers too. In the long term it’s probably a good thing that she didn’t make it through. Whilst those tasting the sweet champagne of success were Rachel – the half-shaven-headed soul singer – who chose to weigh down her ears with a couple of antique horse shoes. We like her. The valley girl made it, making her the most famous person in her village ahead of Rhodri the Maniac Clown. And Stacey Solomon, who will provide a better life for her child by jetting around the world, occasionally tearfully calling him on speaker-phone from inside the bogs at Movida.

And so to the most competitive category – the over-25s. The girls were always going to be dead weights, which isn’t a pun intended at the buxom one with the deceased father. They never really stood a chance. The thinner one wasn’t womanly enough to distinguish herself in the older category, whilst the larger woman must already be in line for a role in Chicago. Her work is done. So it was a battle amongst the men/boys, a battle lost by Daniel from One True Voice, which is surprising as he might just have been the best singer in the competition. Cowell’s logic was that he’d been there, done that, and should probably think about sodding off now. Hence he chose to go with Danyl, who seems to spend the majority of his song renditions ad-libbing a new, awful cover version, which he chooses to croon from one side of his mouth. Olly, who is surely destined to be featured somewhere in a Gaffney/Bowers/JLS VIP roast at Faces nightclub in Essex in the not too distant… and Jamie Afro, who looks like the kind of person who uses beads instead of doors.

As predictions go, we managed to call eight of the final twelve. Hence we shall put our neck on the line early on, and call the most successful members of each category as: Joe, Rachel, Miss Frank, and Olly.