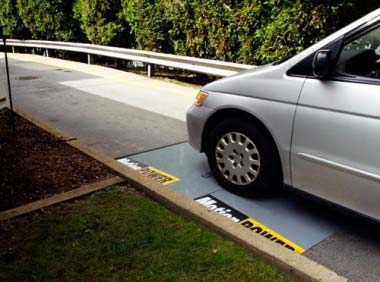 Now, this is a little bit of genius not too dissimilar to one of my own concepts, the high-five generator, seen here on Gizmodo in late 2008.

The illustrious scientific minds at MotionPower have created the MotionPower Speed Bump. In the simplest terms, it generates electricity every time a car passes over it. We’re not entirely sure how it does this, but we’ve been told it’s got something to do with physics.

The first installation of this groundbreaking device has been installed at a drive-thru Burger King in New Jersey. This is a stroke of genius, because we all know that the future will consist of driving to Burger Kings for your food tablets, which will then in turn help power your Segway – you know, the standy-uppy two wheeled vehicle thing. That will then take you from your car to your front porch – at which point you’ll get on a sit-down Segway to roam freely around your home watching LaserDiscs on it’s built-in 450 inch OLED flat screen. Probably in a comfortable, reclining position whilst a robotronic chair massages your bedsores. There’ll be built-in, self-replenishing beer coolers, too.

A few years after that, it’ll be flying cars.

But for now – speed bumps! Yay!