Love shouting abuse at the idiotbox? Here’s some quality fodder! 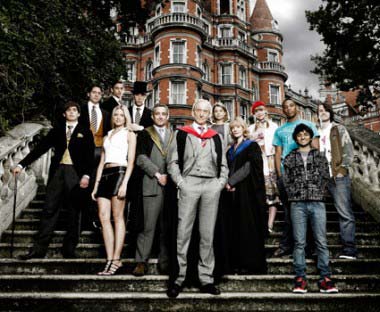 If Hollyoaks didn’t make you want to chew off your own face off in anger and frustration at the unholy depths TV can plummet without irony, then Trinity, without a shadow of a doubt, will. You will literally have no face by the end of a single episode. It’s the new weekly show on ITV2 (yes, it’s that good), set in a fictional English public school (because posh people are always having sex), stuffed un-imaginatively with female, blonde, straightening-iron enthusiasts – who just adore having sex – and boys fractionally too ugly to be in boy bands sporting top hats. The plot – which it’s simply too painfully clichéd to place in inverted commas – hints at the school’s dark underbelly and grotesque historical secret. Alas, this is merely an excuse to place shiny, pointless teenagers making crass innuendoes on top of each other and IN YOUR FACE. Hopefully, you’ll love it as much as I do – because it’s exactly the sort of rich mine of lameness that provokes unimaginative pubescents to self-abuse and makes for a top-quality sofa-heckle.