Couple of lovely jumpers, there 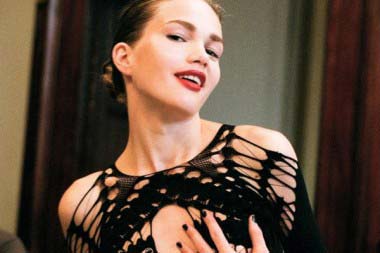 What a London Fancy Dress Week – a gang of furious trendy-bendies went loco outside the Westwood show, because they couldn’t get in even though they had front row tickets, and another model size debate kicked off. Over at Mark Fast’s knitwear show, he sent out models of sizes 12 and 14. Sweet Jesus. Look at those numbers. Aren’t models supposed to look like giant lollypops? Was it not the fancy dress world that made a rule about runway girls having sparrow legs and breezy malnourished prisms where a stomach should be? Mark’s stylist, Erika Kurihara, was so angered by these normal-sized women that she allegedly walked out. Hopefully they’ve kissed and made up by now, and are currently gorging themselves on pies and lard.

At Fashion Fringe, four young aspiring designers with astronomical haircuts battled it out for the big prize of cash and support to make nice frocks and blouses. There was a world of pink happening, and plenty of very tall girls walking up and down a catwalk as if an invisible hand were slowly dragging them by the pelvis. Colin McDowell’s team of judges, including Donatella Versace, ended up choosing the gorgeous collection of Jena. Theo. Incidentally, did you know that Donatella’s name comes from combining the key elements that make up her skin tone and texture? Doner meat and Nutella. It’s a fact. Seriously, check Wikipedia… actually don’t. Just trust me.

Celebrity guests included Little Boots who was wearing shoes, and The Prawn from Girls Aloud. Or, at least, I think it was her. I didn’t want to get too close, as I’m allergic to shellfish. And Wotsits.