… and something about this dog 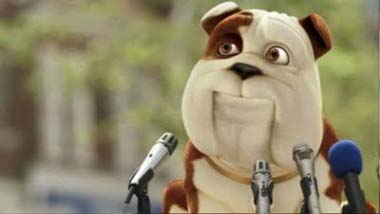 It’s always a treat to hear from a member of the Interestment Family, and today it’s the turn of Steve – a funny man with a passion for football. He had this to say about all of the weekend’s action…

Wow, wasn’t it brilliant? The drama! The tension! The near balletic poetry of it all! Could this one be the best ever? Well it was a pretty good, that Strictly Come Dancing line up, but it’s early days yet, and Alesha Dixon is already splitting opinion right down the middle. But enough of the glitzy talk about swishy skirts, let’s focus on the footie. There sure was a lot of maths to get through at Old Trafford over the weekend. Man United won 4-3, that’s an amazing seven goals, with the seventh coming in the sixth minute of injury time, but Mark Hughes thought there should only have been four minutes, while Alex Ferguson thought they should’ve won 6-0. But, but, there were seven goals, is anyone else totally confused?

Horrible little oik Craig Bellamy sure was, his number rage causing him to give a fan who ran onto the pitch a good hard five fingers (well four fingers and a big podgy, sausage like thumb) across the face to teach him a thing or two about counting. There, that showed him. That showed him good. Craig Bellamy can count to five, deal with it, sucker.

Things got physical at Villa Park too, as Martin O’Neill squared up to one of his players, after a row over the last Rolo got ugly:

“There was no wrestling, that was a figment of the onlookers’ imagination.”

Too true, everyone knows that wrestling is pre-planned, and that the only dignified way to settle a Rolo row is with a good old fashioned Thumb War. One, two, three, four…..

Over at Stamford Bridge, everyone’s favourite Churchill the dog lookalike, Harry Redknapp, watched his Spurs side get a right whooping and lose two more players to injury before explaining:

“You can’t go out and play without doing hamstrings, groins or calves.”

Maybe you should stick to the more traditional heads, shoulders, knees and toes before kick off ‘Arry? You’ve just been asking for trouble haven’t you?

And finally, having grown tired of the diamond and Christmas tree formations, Gianfranco Zola shares his new masterstroke:

“I normally like to play with one striker and two small ones behind him.”

He calls it Il Gallo e le Palle, which roughly translates as The Cock and Balls.