Basically, a story about a hard drive 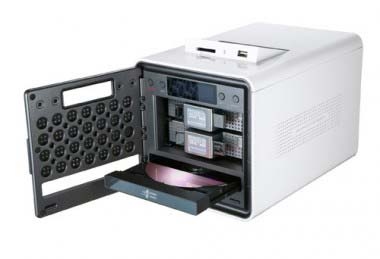 When I was at the Technology and Gadgetry School of Journalism in Agunnaryd, Sweden (where IKEA started, as it happens), I was taught the most important rule of writing about gadgets:

There are two sides to every gadget, the first is what it does and how well it does it. The second is how AWESOME does it look?

Behold, the LG N2R1 NAS. Just what the hell is this thing? It’s got a door with cool holes on it that look like they came out of a nuclear bunker, and you can put CDs in it! There’s a pop-up thing on the top with a USB plug. And I bet that screen looks all retro and orangey when it’s on, like something out of War Games, starring Matthew Broderick. It’s glossy and white on the outside, and all sterile and mechanic on the inside, as though it fell to Earth from the space ship in 2001: A Space Odyssey. It definitely speaks like HAL, it must do. Sitting there, challenging you to games of chess, tic-tac-toe, and global thermonuclear war.

Or perhaps it’s some kind of time capsule? Actually, I bet it is. By the look of it, you probably have to press certain different nozzles and gizmos in a specific sequence to make it open up and reveal the treasures of a past alien civilisation. Maybe there will be the secret to time travel inside? Or perhaps a terrible spore that will turn us all into growling, lurching zombies? I’d like to see it filled with unicorn tears (of happiness).

Whatever it is, we at the 28-story building with many, many attractive young women typing on typewriters in it – aka the Interestment offices – have pre-ordered one for each of our beautiful employees for their Christmas present.

(BTW, the LG N2R1 is a network-attached storage device – a hard disk, boooring – that accommodates up to 2TB of data and features a built-in DVD burner. It is expected to be available at online retailers some time this Autumn for a Rip-off Britain markup equivalent of US$399)

You heard it here first. Probably.