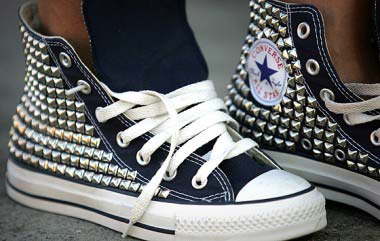 Fashion – it’s so damn hard to keep up with. The minute we’d cottoned on to wearing Brokeback Mountain cowboy shirts, tight little shorts, and bright orange deck shoes, all of the angular fashion kids had moved on to something else. We felt so stupid, standing there in a grotty East London pub, everyone laughing at us from behind their heavy curtained fringes. We just looked so Spring/Summer 09. We didn’t realise that it was Autumn/Winter 10. Hence, we shan’t be returning to that pub in a hurry. Or will we? Thankfully, here in the sprawling Interestment offices, we have access to some of the greatest fashion brains in the whole of London, so rather than walking through trendy Shoreditch with our ears pressed against coffee shop windows trying to decipher tips, we just ask Hannah B – friend of the site, and massive expert on cloth. “Zips and studs are very popular at the moment,” she told us over a pint of the Sea Breezy stuff, “not so much in a Vivien from the Young Ones style, but much more chic than that.”

“You’ll find them classically placed on leather jackets – which is nothing new – but also on shoes, belts, dresses, leggings, jeans….everywhere really. Agyness Deyn was spotted recently wearing customised Converse with studs all over them and these boots are to die for. It’s all a bit bondage which instantly makes it sexy, but as the high street is proving, its totally wearable as well.”

So there you have it. Studs. Now go, people. Shop!