Finally, the clash of the titans 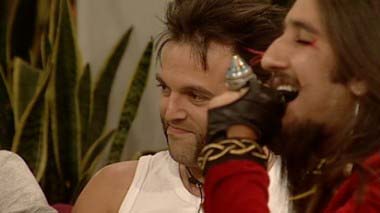 It was always going to happen eventually – two big names, one big vote. And now the only two men in the house who don’t actively pluck their pubes will be vying for public love. In one corner, Marcus – a man who has come a long way in the last few weeks, and now seems almost comfortable communicating with people outside of internet chatrooms. If this socialisation process were to continue, he might yet rid himself of the hillbilly haircut. Time will tell. And in the other corner is Siavash. Mighty Siavash. Yesterday kitted out in lizard camouflage. His obsession with nominations finally got to the rest of the house, Charlie in particular, and Siavash’s handling of the situation was pretty admirable. Amidst a tirade of abuse, he stood strong and calm, like a deaf giant at a heavy rock concert. Good for him. The odds would suggest that Marcus is off on Friday, but an uncomfortable hunch suggests that we could be bidding a very tearful farewell to our Iranian Dave Lee Travis.

Elsewhere in the house, Sophie further endorsed the importance of satellite navigation systems by failing to identify England on a map of the world. David should really receive a lifetime ban from libraries, churches, and snooker matches. And Rodrigo now just wanders the house pointing randomly at people and telling them to shut up. Or, in Brazilian, “shut urp.”