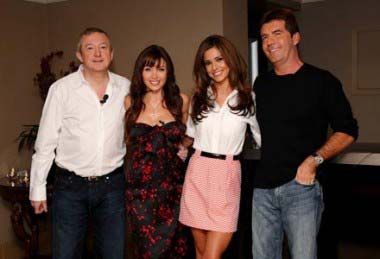 We’re into series six of the X Factor now, and the show producers have finally twigged that a touring freak show needs a cackling audience to achieve maximum humiliation and higher viewing figures. Hence episode one featured not just the four judges in a stuffy room experiencing the monotonous conveyor belt of decent singers contrasted with plucky fighters with brain damage, but behind them were around two thousand cackling maniacs booing and hissing misplaced notes, or unachievable octaves. Should this transition continue, and future editions will find the contestants wheeled onto the stage in cages, and pelted with rotten fruit and vegetables before they’ve even had a chance to sing the chorus of Hero. It has all become rather cruel, the singing competition equivalent of a man tutting all the way through a job interview to put you off.

Still, there were some highlights. Of the bad ones, the two gargantuan girls who attempted Mariah Carey had no chance. Firstly because they couldn’t sing. But secondly, because they were fat. This audience can’t stand fat people. They may as well have taken the stage to a tuba soundtrack. Also with no chance were the three London teens who hoped to prove that not all kids go around stabbing each other and robbing people. The way they butchered Umbrella suggested that they should probably consider a future in street crime. The pick of the awful ones, though, were the Irish twins with the Eraserhead haircuts, who strode out onto the stage hollering “good evening Glasgow, are you here to party?” – a strange question considering the nature of what they were doing. No, twins, Glasgow is probably here to boo you. Which they surely would have done had the identical Dubliners not been so astonishingly overconfident that even an audience of thickies and durr-brains was left in a stunned disbelieving silence. Of course, Louis made sure that they went through.

And so to the good ones, all of whom had made it through about three rounds of auditions to get this far, yet still appear shocked by their own talent when they sing. The first to wow the panel was Stacey, who loves being a single mother, because, in her words: “I can do what I want”. Which doesn’t exactly bode well for little baby Zachary, should Mummy suddenly decide to swan off for a few days, or have a series of long lie ins. But no matter. She did a sweet job on a Louis Armstrong number, which was made double impressive by the fact that her speaking voice was like listening to David Bellamy shouting over the din of a bear scratching a blackboard. She’s one to watch. As is Joseph from South Shields, who looks a bit like Donny Osmand. Duane who tried out last year, and openly came out on stage as a big Beyonce fan. And, of course, Danyl (pronounced “Daniel”) who continues the rich tradition of reality television stars with normal names with wacky spellings. He earnestly told the judges that he’s a teacher, omitting the fact that he teaches DANCE. It’s a bit like someone telling you that they’re an actor, because they read from a script at their telesales job. Still, nitpicking aside, he stole the show with a brilliant Joe Cocker version of With a Little Help from my Friends. The audience loved it, the panel loved it. The whole thing was only slightly ruined when Danyl dashed out to his waiting friends bragging about Simon giving him a standing ovation. Humility, Daniel, is the key. This unforgiving audience can’t stand a Billy Bragger.

One show in, great stuff.