Including these delicious meaty eggs… 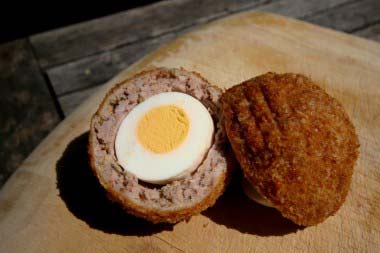 We’ve done it, friends. After several decades of firing canons at the atmosphere, driving monster trucks around in deserts, and secretly instructing teenagers to spray their Lynx Java directly at the moon, we’ve forced a climate change. No more dreary grey skies for us, no sir. When it gets cold, it’s going to literally freeze cats in the street, when it’s hot, expect to see dogs microwaving in cars. But best of all, it looks like we’re going to get another crack at having a summer this year, so in the coming weeks, any local bit of green, for sprawling parks, to the miniscule square of lawn between road lanes, will be awash with fashionable young people in silky shirts, folding tasty European meats into their cherry lips. It is Picnic Season after all – by far the greatest of the culinary movements.

So with that in mind, we’ve flung open the Interestment Cook Book and selected excellent outdoor treats that anyone picnicking would be a fool to leave behind. Today, canapes…

3. A few packets of gormet crisps

Every meal needs a sexy starter, and a picnic is no different. Simply throw your treats onto a selection of plates, then talk like lovers, whilst taking enthusiastic bites from a brilliant scotch egg. Delicious.