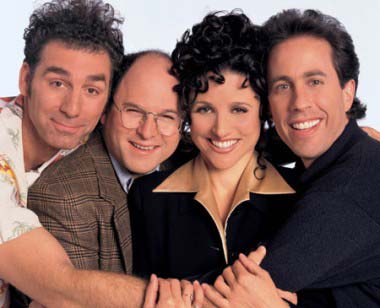 Without a doubt, Seinfeld is the greatest sitcom ever made. Many moons ago, we rated it our number one. So it was with an excited quivering hand and a strange sick/elated feeling deep within our loins that we heard news of an intriguing reunion, all set to take place during series seven of Curb Your Enthusiasm – which, by the way, would probably rank around five or six in our favourite comedy shows ever. Hence this is astonishingly good news indeed, and we’ve pretty much been squealing with delight ever since we first caught wind. The premise appears to be that Larry David will spend a big portion of the next season attempting to get the cast to agree to a reunion, which, of course, would be great. Especially for Jason Alexander – the little man who played the wonderful George Costanza – and Michael Richards (Kramer), both of whom have enjoyed little success since the show finished over ten years ago. Richards did enjoy a brief moment in the sunshine when he decided to stop telling jokes and started shouting racist insults at a couple of confused black gentlemen in the middle of a comedy routine, but Alexander hasn’t been quite so fortunate. Meanwhile, Jerry and Julia Louis Dreyfus have kind of been okay, despite the so-called Seinfeld Curse.

The show airs in September in America, which means we’ll probably get it next year or something. Can’t wait.