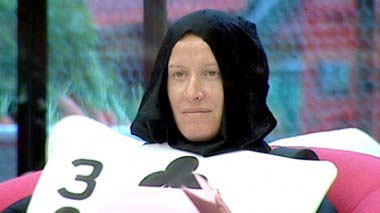 As Siavash lay in a pretend rabbit hutch slowly munching through carrots, dressed like a vagrant Geisha girl, things were kicking off inches away in the communal area. The cause of the row appeared to be Freddie‘s hysterical glee that arch-rival Lisa might finally be getting her comeuppance. And not a moment too soon. Channeling the spirit of an extremely grumpy lesbian, she has done little more than slump at the bus stop awaiting transport out of the house that never looked like turning up. That particular wait should come to a very welcomed end this Friday. Her conversations with David have been the listening equivalent of watching two monkeys curiously poking at a mirror attempting to decipher their reflections. Brainiacs, they are not.

David, sadly, further proved this when explaining to Bea that he didn’t want to blow their disagreements “out of precaution”. Either he was clumsily attempting to quash their long term row, or he was making a sudden change of subject, and honestly trying to tell her that he’d run out of condoms. But we doubt that.

Elsewhere in the house, Hira spent six hours attempting to smash a cake with her face, Marcus explained his unbelievable outburst in which he called David a “fat cunt” by insisting that where he comes from, they say things like that “every four words”. In which case, his days as a popular window fitter could be drawing to a very sudden close. And Charlie has seemingly run out of things to say.

We still want Siavash to win it.