All for charity, this one… 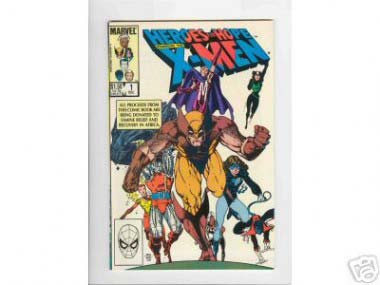 Such is the worrying extent of this cruel financial winter that people who would never have considered joining the army, or teaching, or plumbing a few months ago are now having a massive career rethink. Which basically means that our national borders will soon be defended by disgruntled ad execs shouting slogans as they sithe through bad guys. Our children will be taught the essentials by ex-journalists who once stood in the same room as Liam Gallagher, and think that makes them interesting. Our pipes will be mended by men in expensive suits, carrying their kit in a briefcase. These are strange, unsettling times. Which is why we go bonkers with glee whenever we hear about wonderful second hand finds. Just this weekend, friend of the site Simon stumbled across a brilliant comic in his local charity shop. “It’s an X-Men comic from 1985,” he told us over a very frothy milkshake, “and all of the proceeds from this particular issue went to famine relief in Africa, so it was a charity comic.” We are, of course, big fans of charity, Simon, and that particular famine was a bastard – we remember it well. The comic features the X-Men heading into Africa to feed the hungry – it’s a wonderful installment. So, come on Si, how much for this well-meant superhero yarn? “A quid!”