The most entertaining housemate? Really? 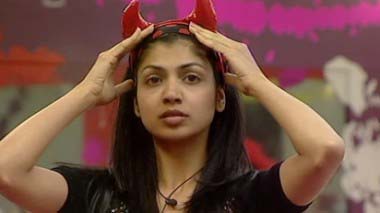 After a couple of weeks of thinking that David – the big gay Frankenstein’s Monster from Yorkshire – might be slightly brain damaged, it was finally confirmed yesterday when he judged Hira to be the Most Entertaining Housemate. It was a move akin to naming Jordan the World’s Greatest Perfumer. Hira, beyond her Mad Lizzy exercise routines, has done nothing. On an even more worrying note, David appears to be limbering up for a battle with the Bea, Marcus, Freddie triangle of doom, after rumours got out that he’s been spotted wandering mouth first around the fridge when no one’s looking. Food theft is a dangerous game, and – rather deliciously – it could make him toast as early as the coming Friday. He also has a massive crush on Rodrigo, which is a worry for the little Brazilian. Might there be a Lennie, Of Mice and Men moment in the pipeline?

David aside, much is still going on in the house. Bea has taken to dressing up as a jumble sale, Freddie promised to express himself in a “wonderful way” during his talent contest solo, and he may have ejaculated mid-song by the looks of things. He might also have confused the word wonderful with really really appalling. His “shoobie-do-waps” were almost enough to induce a nationwide stately home bricking spree. Sophie has no future in the rap game. And Marcus, it seems, cannot have both his mouth and his eyes open at the same time. It’s either one or the other.

Siavash, still, is our number one.