Music setting a bad example No2: Take That

Think before you start singing… 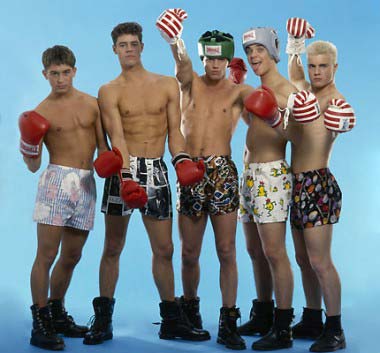 With the absence of Top of the Pops, and a confusing amount of radio stations to choose from, it’s hard to know where to listen to music these days. We tried jogging with synchronised Discmans, but the things kept falling out of our pockets and smashing to smithereens in front of other joggers – all of whom could clearly afford futuristic iPods and shorts that weren’t just an old pair of jeans chopped at the knee. Damn posers, with their cappuccinos. Anyway, we decided to try out The Box on cable television, so we all sat down together – extended family and neighbours – and first up it was Take That with their hit song Back For Good. This should be good, we thought – none of us had heard it before. Three minutes later, the cousins were crying hysterically holding pillows over their faces to protect their eyes from the nasty singing men, Grandpa was simply shouting “what is this?” over and over again like he was having a war flashback, and the neighbours quietly left the room, muttering something about how they weren’t coming “back for good”. It was a terrifying experience for everyone involved. We were disgusted, and here’s what your children would learn from these so-called gentlemen of pop…

First up, it’s raining in the video, and only Mark and Jason have sensible waterproof jackets on. Williams, for heaven’s sake, is wearing a fur. Ridiculous. But we let that go, because it’s the actual singing that really stings. “Got your lipstick mark still on your coffee cup,” croons Gary Barlow, bold as brass. This means one of two things: 1. He saw you drinking a coffee somewhere, he stole the cup – hence the “your” in “coffee cup”, on the assumption that shared bits of crockery are not specific to any one member of a household. Otherwise it would be “your lipstick mark still on OUR (or THE) coffee cup.” Or it could mean, 2. The man has broken up with his woman and become a complete slob. He hasn’t washed up for weeks, old lipstick marks are all over the place, he probably smells. Chances are he just prowls around the once-shared flat in revolting tracksuit bottoms and a vest, occasionally logging on to Facebook to change his status update to explain that he’s totally fine now, having a really cool time actually.

2. Just say sorry, even if you have no idea what you’re apologising for

“Whatever I said, whatever I did,” continues Barlow, now into the throws of the song, “I didn’t mean it.” That’s right,“WHATEVER I said” – he can’t even remember what he said, he doesn’t know what what was said, he just knows that he probably said something. “WHATEVER I did” – oh, he’s covering as many bases as possible now. He’s realised that if it wasn’t something he said, it must be something he did. “Did” being so non-specific that it could really apply to anything. “I didn’t mean it.” He didn’t mean to do whatever it was that he supposedly said or did, neither of which he is remotely aware of. Instead he’s making a weak blanket apology, simply asking you to assess what he might have done wrong, and accept an overall sorry for it. In short, it shows a massive lack of both empathy and personal awareness.

3. If you want to win someone back, do anything they demand

“Just tell me the song and I’ll sing it,” pleads Barlow – basically the only singer on this one, the others occasionally mime something in the background. With such a soft, flannel-like sentiment, he might as well simply tear out his spine and hand it to you on a silver platter, like a bony eel, flapping around. Here’s an idea – tell him to jump off a cliff.

4. Finish by sending out mixed messages to your ex-lover

To his credit, Barlow acknowledges that his ex is doing pretty well without him, thank you very much – “in the twist of separation you excelled at being free”. But then he goes on to ask – “can’t you find a little room inside for me?” At this point his puppy dog eyes are going tearful at the side. Has he really changed? That’s what his ex-lover is considering. After all, look at him, tail between his legs, asking for another go. He’s softened. AND THEN BARLOW RUINS EVERYTHING. In the final line of the song, after almost four minutes of playing the wounded animal, he has a change of attitude and simply demands another go. “I guess now it’s time, that you came back for good,” he growls, the underlying threatening nature of the lyric barely masked without the backing singers crooning away with him. He’s not asking anymore, he’s telling you what to do. He hasn’t changed one bit, girlfriend!

Here’s the video, should you be able to stomach it…

One Response to Music setting a bad example No2: Take That