More books for the beach… 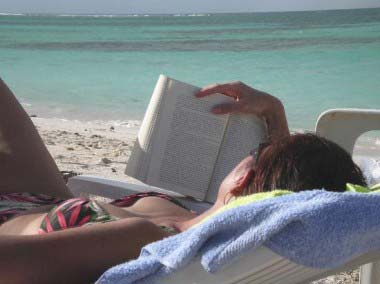 It appears to be raining outside, meaning that the whole heat wave thing a month or so ago was just another cruel trick to sit comfortably alongside the plague of locusts, the plague of frogs, Tom Cruise, the Trojan Horse, and the Bermuda Triangle. From here on in, your Summer wardrobe will consist of shorts and a mackintosh. Thanks a lot, Anemoi, God of Wind, and Poseidon, God of the Seas. Between you, you’ve ruined another sunny season.

But no matter, the crappy weather also signifies the beginning of holiday season, so millions of frighteningly red Brits will be littered across Spain’s most easy-to-locate beaches – some braving bosoms-out, some men choosing to keep their tops on. Most of the women will be topless. It’s a great time to cram in some decent reading, and already we’ve made many book recommendations, but they have since been flooding in. Excellent comment maker Forty-forty five recommends Shantaram by Gregory David Roberts, which is the tale of a wanted man hiding out in India, featuring the very a la mode slums, before he eventually ends up selling arms to Afghanistan. Lots going on there. And he also tips The Day of the Triffids by John Wyndham, which is the one about the aggressive flowers.

Both Kingsley and Martin Amis have been strongly advised, with Oliver doffing his cap to “anything by Kingsley Amis”, although the word on the street is that The Green Man would make for great beach company. Whilst, in Martin’s case, it can surely only be Money or London Fields. We must confess to absolutely adoring Money – it’s one of the greatest bumbling drunken maniac books ever written, and we do not say that lightly.

Other strong recommendations have included The Princess Bride by William Goldman – a great book – and Kane and Abel by Jeffrey Archer, which might have been a joke, but is actually quite readable.

2 Responses to More books for the beach…