Bad news, one of these men has vanished… 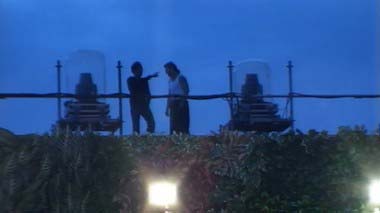 Without wanting to spoil the surprise, let’s just say that the most enormous pillock in Big Brother history has probably been spared an evening of jeering, and a very tense Davina McCall interview. Oh, sod this, we’re no good at secrets – Kenneth has climbed the walls and left the house, and Marcus, bloody Marcus, helped him do it. Nice one Marcus.

Without any shadow of a doubt, Kenneth has been one of the foulest contestants ever. One that we could only watch through the gaps between our fingers, muttering in disbelief. Every single time he opened his mouth, something foul came out, like an appalling comment about what he likes to do to his girlfriend, or a small monologue about how people think he’s amazing. It was the Big Brother viewing equivalent of someone repeatedly calling you over, saying they’ve got something to show you, then opening a box which is full to the brim with things they scooped up from inside festival toilets. Every time you go back, hoping that it’s not the putrid gunk again, but sure enough, there it is, the fly-ridden raver poo. That’s what it was like listening to Kenneth, just one long stream of oozing revoltingness. A hunch suggests that he knew his time was up.

Elsewhere in the house, Lisa has almost completely morphed into a mumbling old bag lady, sitting at a bus stop, looking for the worst in people. Watching her yap away to cute little Sophie is a bit like watching a Yorkshire Terrier attempting to communicate with a Barbie. She does seem to have a friend in David though – he’s the fourth most popular gay guy in the house. The one with the tatts and the appallingly bad hair don’t. The one who isn’t Charlie or Rodrigo, who appear to be working themselves up to the most over-the-top on-screen frenzied angry-sex imaginable. Rodrigo crosses his legs every time he rants about his sexy northern nemesis.

In other sex news, Bea and Freddie are in the process of setting up a little Wicker Man cult, and would surely produce a small litter of chanting Christopher Lee’s were they ever to mate, which seems worryingly inevitable. While an enormous curve ball has been thrown in the shape of a Siavash/Noirin romance. It’s bolted from nowhere, like if Tom suddenly burst into the toilet while Rodrigo was silently combing his hair, and make no mistake, she’s a very beautiful girl, and he’s our number one, a beautiful man. But another one of those hunches suggests that we won’t see Noirin’s head engulfed in a gentleman’s mighty beard any time soon.

And, in completely non-sexy information, the final word must really go to terrorists from Pakistan, who have really annoyed Hira over the years. She wants to know: “what are you doing?”.