The BEST Ashes sledges of all time!

This man can be a real meanie… 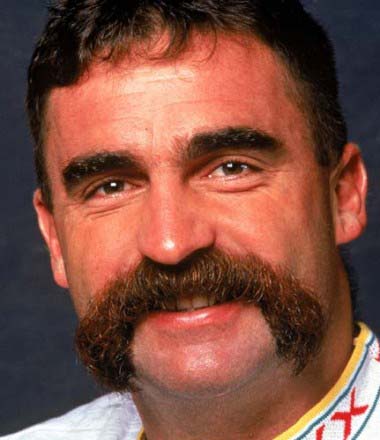 As ever it’s with a gigantic high ten that we bid good morning to Rory, a very important member of the Interestment family. He had this to say about nasty/funny things uttered on a cricket pitch…

Astonishingly, just prior to the start of this Ashes series, the Australian Cricket board issued their team with a peculiar edict: no more sledging. Seriously. Apparently they then followed this up with a letter to Graham Norton asking him to “tone down the whole camp thing” and a petition to stop zebras being all equine and stripey. Putting aside the sheer ridiculousness of their request, they seem to be overlooking the fact that if we didn’t have sledging we wouldn’t have gems like these to remember:

“Mate, if you just turn the bat over you’ll find the instructions on the other side” – Merv Hughes to Robin Smith.

“All right, which one of you bastards called this bastard a bastard?” – Vic Richardson, the Aussie vice-captain interrogates his team after England skipper Douglas Jardine complains he’d heard someone swear at him on the field.

Aussie batsman Mark Waugh: “Mate, what are you doing out here. There’s no way you’re good enough to play for England.”
James Ormond: “Maybe not, but at least I’m the best player in my family.”

Aussie wicketkeeper Rod Marsh: “How’s your wife and my kids?”
Ian Botham: “Wife’s good, but the kids are retarded.”

“Hey Gatting – move out of the way. I can’t see the stumps.” Dennis Lillee to a rotund Mike Gatting.

“The other advantage England have when Tufnell is bowling is that he isn’t fielding.” Aussie ex-player and pundit Ian Chappell.

“I don’t mind this lot chirping at me but you’re just the bus driver.” Nasser Hussain to Justin Langer

One Response to The BEST Ashes sledges of all time!