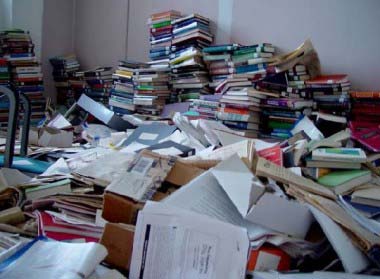 Mind and body have always maintained an awkward relationship, with one keen to sit down and read, while the other wants to bounce around doing stuff. It’s tricky to find that middle ground. Hence why it’s rare that you’ll meet a body sculptor with much to say, or an English professor with a couple of growling pectorals threatening to burst through his sensible shirt. It’s pretty much one or the other. In this cruel financial downturn, however, body is beginning to take an upper hand, as withered businessmen fight to fend off the post-traumatic stress of getting fired by jogging in parks, or sitting on roadsides bench pressing old bricks or discarded Coke cans. They can’t afford to feed their minds, making for some strange, rather stupid, times. Times that are so weird and mean that we dance for joy whenever we hear about intellectual bargains. Just this weekend, a very high ranking member of the Interestment family stumbled upon an old charity shop flogging books for 10p each – and not just your rubbish Robbie Williams and Sharon Osbourne biogs either. These guys had Salinger, Bukowski, Hemingway, Rushdie, Amis, Oliver. All the good stuff. And thus, a bag was stuffed to the brim, and a doddering old lady behind the counter demanded “£1.40”. She was given £1.50 and told to keep the change.