A doff of the cap to a great man… 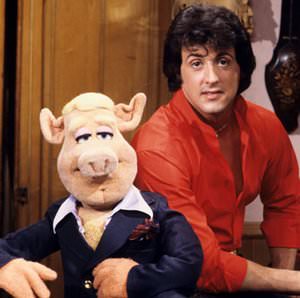 If ever there was proof that it’s not just great looking guys who get all the breaks, it’s Sylvester Stallone – a man who was blessed with his mother’s weird skew-if face, and a voice box that begins somewhere in his stomach and stops just before his throat. And yet, he has conquered Hollywood, made squillions of dollars, and single-handedly reinvented the hard working underdog hero – in many ways, you could call him the Bruce Springsteen of cinema. Hence, with Bruce enjoying a lavish late moment in the sunshine, we thought we’d turn to Sly Stallone, and honour his four finest moments… 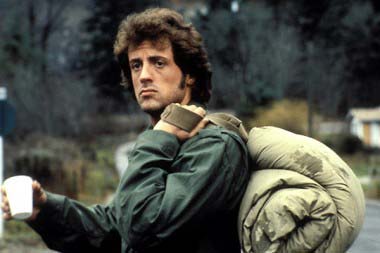 Stallone plays a grumpy Vietnam veteran who has lost all of his buddies in the war, so has taken to walking the planet in an almighty huff. Never has a man looked so serious for the length of an entire film. It begins with him wandering into a tiny little town innocently searching for a missing friend, but a dangerously unlucky sequence of events find him lurking in the woods, attempting to fend off hundreds of disgruntled police officers and army types. All he wanted was a bite to eat. Steve McQueen was reportedly keen on the role before Sly stepped in, and a suicide ending was rewritten, presumably so that he could bulk up, smear on some baby oil, and churn out three appalling sequels. The first Rambo film, however, is excellent. 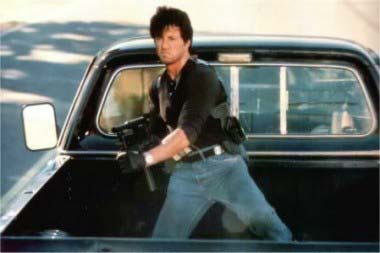 Stallone had an astonishingly successful 1980s, with Rocky III and IV, Tango and Cash, Over The Top. But the one that really stands out is Cobra, the story of a match-chewing renegade cop who could be just as deadly as the bad guys. In this case, the villains took the form of a gang called New Order – not disappointingly, the electronic band featuring Bernard Sumner on vocals. 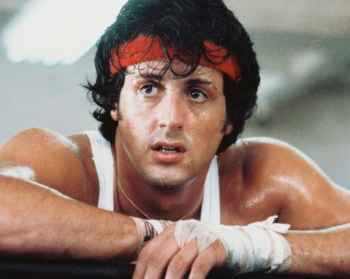 The one that really put Stallone on the map, it even won the 1976 Best Picture Oscar, up against greats like Taxi Driver, Network and All the President’s Men. The tale of a washed up boxer gifted a chance at the big time, it famously features Stallone trying to woo a nerdy woman called Adrian. Many people mightn’t remember that Rocky actually loses the fight against Apollo Creed. He wins in Rocky II though, before going on to bust up Mr T (Rocky III), the giant Russian robot (Rocky IV), and probably some other tough guys. 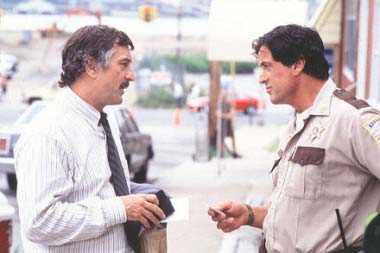 Just when we thought that Sly was just a great big lump of beef that could just about muster a grunt here and there, he thought he’d do some acting – upstaging the great thespian chums Robert De Niro and Harvey Keitel while he was at it. The story of a fat old policeman with hearing difficulties, this is probably the fourth greatest corrupt cop movie of all time, behind Serpico, Training Day and LA Confidential. It’s that good.