Is this still the world’s greatest roof? 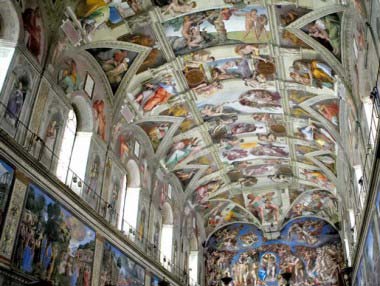 It’s with the usual hysterical squealing and jumping up and down that we say hello to Rory. He’s here to talk tennis, and had this to say…

Day seven of Wimbledon and history was made. June 29th 2009 will forever be known as the most exciting day in the history of upper chamber architecture since Michelangelo strolled into the Sistine Chapel with his paintbrush, glanced up and announced: “I’ll have a bash at that.”

Finally, after days spent secretly praying for rain, the Wimbledon organisers finally got their wish. When the most sprinkly and half-hearted of rain showers started to fall over SW19, they could stand it no longer, the new toy simply had to be used. Spectators hadn’t even had time to remove their aviator shades and erect their brollies when the covers came out and preparations for the deployment of THE ROOF were made.

And with that, we bring you our top four Wimbledon roof facts: 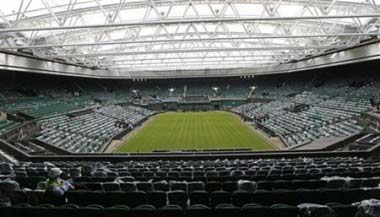 3 It would take 7,500 Wimbledon umbrellas to cover the same area as the roof.

4 290 million tennis balls could fit in Centre Court with the roof closed.

The next bit of the day involved Andy Murray and Stanislas Wawrinka keeping everyone up way past their bedtime as they duked it out under the lights on Centre Court. The downcast Scotsman prevailed eventually, and managed to remain upbeat about it for at least, ooh, 23 seconds. After which he had this to say:

“We were sweating so much. Both of us were trying to get white towels because your hands were drenched. When I finished it was like I had been in a bath. It slowed things down a lot and I struggled to serve because it wasn’t coming off the strings that quickly.” 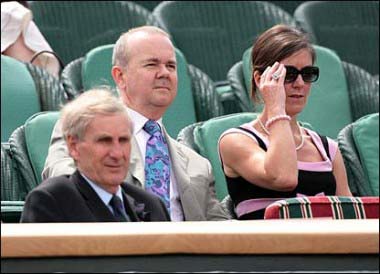 He was probably just upset that Sean Connery didn’t show up, leaving him to make do with Scot-lite Ewan McGregor for celeb support. Never mind, at least Ian Hislop was there too.

No doubt Muzz Chops will be Twittering all about it as the day wears on. Stay tuned racquet fans…