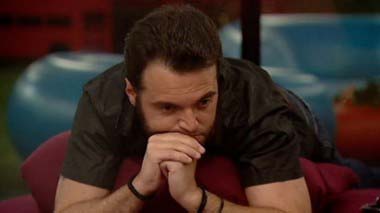 Poor Marcus. Big hairy Marcus. Marcus with the most astonishing mullet ever broadcast. Marcus with a series of very bad tattoos. Marcus who stands alone sometimes, with shower water cascading down his soft body, scrubbing himself feverishly with whatever kitchen product happened to be nearest the sink. Marcus who makes strange, almost pointless, presents from bits of scrap metal. That Marcus. The Marcus who could have any woman he wanted were he not cock-punched by authority every time they were about to fall for him. It probably happens all the time to gorgeous, yet cursed, people like Marcus. Oh how Lady Luck gives with one hand and karate chops your balls with the other!

Just yesterday, Noirin was about to fall in love with him, then Big Brother called him to the diary room. In those few moments, she managed to pull herself together. “Don’t fall for him Noirin,” she told herself, “he’ll only break your heart, just don’t fall for him.” It says a lot about the mental strength of the Irish stunner that she can resist. Has she been hurt before? Have you Noirin?

Elsewhere in the house, Sigourney Weaver from Alien 3 has been drafted in to replace Lisa, Rodrigo came very close to drowning in the bath, and Kris made everyone feel awkward by describing how he likes to pick up girls by performing a series of hilarious exercise routines. When no one laughed, he decided that he might dump Sophie.

On a very worrying note, Freddie thought it wise to explain that he sometimes goes to nightclubs to paint people’s faces in exchange for beer. He once painted fifteen Chinese people in about seven minutes, he laughed. A hunch suggests that fifteen very unhappy Chinese people left a club early that night.

The Interestment favourite is still Siavash.

One Response to Big Brother 10: Sexy love affairs, and facepaints