Another pay out for this slacker… 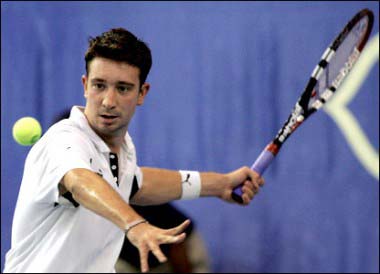 It’s always wonderful to hear from a member of the bulging Interestment crew, and today Rory – a terrific writer with wit galore – is back with his tennis update. He had this to say…

Day Two, and dear oh dear. A sorry day for the home-grown hopefuls yesterday as a whopping six Brits were knocked out Wimbledon. Of course Andy Murray won, but that was no huge surprise. Among the losers was number one British female, Anne Keothavong, who was reduced to blubbering mess when she threw away a 5-3 lead to go tumbling out. Dry your tears, woman. Dry your tears.

Worse still is the plight of Alex Bogdanovic (pictured) – for the eighth year in a row this plucky fella rocked up and got dispatched in the first round. In straight sets this time. “I’m getting better and stronger each year and that is giving me confidence,” he lied yesterday, his cheeks reddening and nose sprouting a matter of inches in the process. Now, you might be wondering why he still bothers to turn up for this annual humuliation ritual. Well, believe it or not he’s earned £75k in the process. That’s £75,000 for being really quite poor at your job. 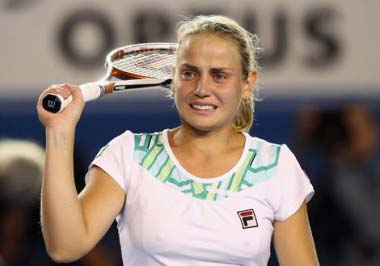 Another player who went out yesterday was Jelena Dokic, the former world number four with the mental dad. His latest act of lunacy, making death threats against the Australian ambassador in Belgrade, saw him, Damir Dokic, jailed for 15 months earlier in June. After the match she said: “Now and forever, there is no way that I would ever reunite with him or ever have a relationship with him. So this is the last sentence ever you guys will hear from me (on the subject) and that’s the way it is.” Interestment was a touch baffled at the time – was this a reference to her dad or that wart she used to sport on her face but has now mysteriously vanished? Hmmmmmm….

And then, the row over grunting in the women’s game went up a notch yet again. Past champions John McEnroe and Martina Navratilova have been among those calling for a clamp-down on the grunt girls. Portuguese teenager Michelle Larcher De Brito is at the centre of the row, after her ludicrous outbursts at the French Open where she reached a staggering 109 decibels or something, causing one of her opponents to lodge a complaint. Haven’t had the pleasure yet?

Clearly as mouthy off the court as he is on it, she’s told everyone if they’ve got a problem they can, like, shove it. “I’m not here to be quiet for anybody. I’m here to win. If people don’t like my grunting, they can always leave.” You can see the crowd-pleaser in action again today…