As ever, it’s a complete joy to hear from a member of the ever-growing Interestment family. Rory – a masterful writer with a dry wit – popped in with this to say about Wimbledon…

Wimbledon is officially under way. We know this because, as has become the custom in recent years, Roger Federer strolled out onto the centre court wearing the kind of clothes you might more usually expect to see someone wearing on cruise ship in the Caribbean. Looking resplendent in shimmering white, he managed to pull off what snooker players have been attempting for years – looking cool in waistcoat.

In similarly ice-cool fashion, he didn’t even bother to break a sweat as he crushed his opponent Yen-Hsun Lu, 7-5 6-3 6-2.

Elsewhere on the courts, Queen’s runner-up James Blake packed his headband and headed for the exit having been defeated by a man called Seppi, Maria Sharapova grunted her way past Kutuzova and an assortment of British players you’ve never heard of lost (most of them in straight sets probably).

One who did lose but in somewhat more exciting fashion was embryonic tennissette Laura Robson. The reigning Wimbledon Junior Champ was beaten in her grand slam debut by Daniela Hantuchova – although couple of twists, turns and serves going the other way could have seen her win it.

You have to feel sorry for her – not because she lost but because of the inevitable tide of expectation that now threatens to engulf and overwhelm her 15-year-old world. To put it in perspective, Roger Federer won his first Wimbledon title aged 21. That’s six years on from where she is now, which is a long time (assuming she ever gets to the level where she might win) with people asking, praying, expecting you to win.

But then, the very fact that she hasn’t turned into one of these loathsome little oiks is pretty good going already.

Have you ever found yourself wondering what those curious little packets are that tennis players seem to be ingesting between games? Here’s Novak Djokovic‘s opponent Julien Benneteau tucking into what might be a Happy Shopper ketchup sachet at 5-0 down in the third set. 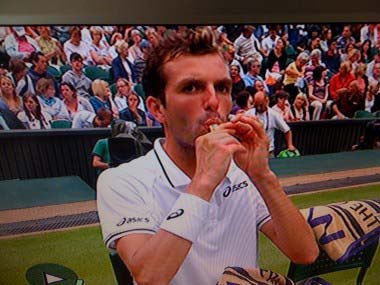 Not only did the microphone-haired Czech have a seemingly-unending supply of Lucozade tablets to chomp on, he also had an energy patch on his arm. No wonder he won the match…

Murray-mania kicks off in earnest today, with the bedraggled racquet-smith up against American Robby Kendrick. Not got a ticket to see the Muzza in action? Like ballroom dancers? Why not join the queue anyway, and see if Alesha Dixon challenges you to a game. For some reason she was doing exactly that yesterday, despite the fact she has absolutely nothing to do with tennis. Odd.

One Response to Wimbledon Watch: Day One