Does strange things with coat hangers… 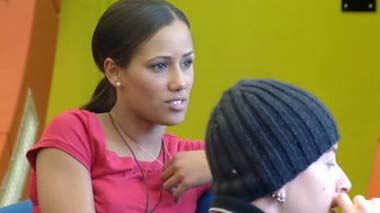 It was just a few days ago that Angel was caught out in one of the most dreadful cider-for-bread deals ever screened, but just yesterday Noirin – the Irish one who managed a three hour hunger strike – almost topped it in a breasts-for-beer debacle, which so very nearly destroyed the onlooking Sree. As fate would have it, common sense prevailed, and she kept her boobs in their top, despite some rather persistent bartering from Marcus, who appears to be having a bit of trouble communicating with women outside of a chatroom. A hunch suggests that it won’t be long before he’s swapping beans-for-pubes with Angel or Lisa.

Elsewhere in the house, Angel has been continuing to showcase her massive eating disorder, and appears to be morphing into Christian Bale in The Machinist. Her two most disturbing moments so far have included skinny dipping in the Big Brother pool, and smiling at Freddie as he embarked on a forty-five minute improvised jazz song. Any sane human being would have started with some jabs, then finished him off with a series of over-the-top rabbit punches and karate kicks.

Siavash is still the Interestment favourite.