Is this man a GENIUS? 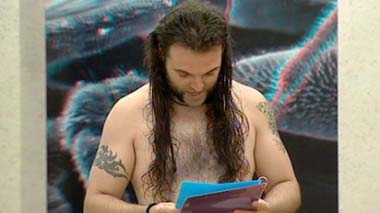 And yet again, Big Brother goes on to prove that if you put a group of human beings together for more than a week, they will either start bickering with each other or attempting to have sex during the middle of the afternoon. It’s a wonder any of us got through double maths without an STD or a busted kneecap.

The sex storyline is hurtling along thanks to Kooks-a-like Kris and the in-house bosomy intellectual Sophie. Literally hours of their day are spent checking that no one is looking before darting their tongues together for a nanosecond of unadulterated sex action. He has vowed to Charlie – played by a young Sean Penn – that this girl is great, but she won’t be tearing him away from his beloved laddy mates any time soon. The very same laddy mates who, by the way, are finally enjoying a few nights out without their curly haired cohort ruining everyone’s fun by explaining in quite revolting detail how he likes to make love to a woman. Are they missing him? Are they?

Elsewhere in the house Karly has been channeling the spirit of Sir Alex Ferguson, and Siavash has bravely decided not to visit the Big Brother sick bay, despite an off-camera accident where he clearly slammed his chin onto a needle by accident. Good for him. Brave boy – and our current favourite.

Angel appears to be slowly dying as her skin becomes ever more pallid and loose, and she appears to be avoiding comparisons with Siavash by thoroughly shaving her face every morning – she was also victim of the worst piece of bread-for-cider business ever screened on television. All very embarrassing.

Which takes us to Marcus – a soothsayer with an astonishing mullet. He appears to be in the middle of a very long live commentary on proceedings, perhaps hoping that should everyone tire of the Geordie bloke, he’ll get the job. His assessment of events has finally got to Lisa, the lesbian punk rocker with eighty piercings in her ear, and she flipped out. Marcus then spent the entire fight explaining to Lisa – presumably with confused viewers in mind – why she was reacting like she was, and how it must be something to do with the way she grew up. The man, it seems, is a mind reader. And as we already know, Big Brother voters bloody hate psychics. He could be toast.