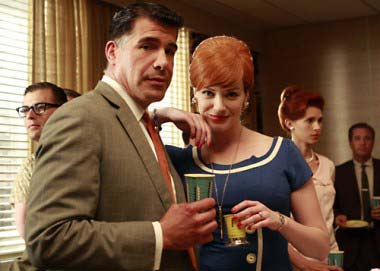 It’s a great day for the Interestment family, as Oliver – usually our expert on fine silks and wonderful cloths – has switched focus to the sexy world of advertising. He had this to say about his favourite television commercials…

In the words of the great and late Bill Hicks, “…if anyone here is in advertising or marketing… kill yourself.” A tad harsh, but he may have had a point. You only need to watch a few minutes of Mad Men to see that those advertising guys had a pretty sweet deal. Almost too sweet. The bastards. Smoking loads, whiskey in the office, lots of sensual kissy face with the ginger one. Then in the 80s, they all got nosebleeds.

Advertising has also given us some truly brilliant moments. Here’s a few of the finest…

In the chocolatey section, this classic Flake advert from the 1980’s just nudges out that filthy cartoon bunny from the Cadbury’s Caramel ads, and there’s no room here for drumming Gorillas either. This has got the lot – a saxophone soundtrack, a sexy girl snogging a chocolate bar in a window, and a little lizard dude running across an unanswered telephone. I’ll bet it was just the neighbours phoning to tell her to turn that bloody Kenny G off.

Selling motors isn’t an easy job. Car makers are shutting down faster than a Porsche being driven by Iron Legs McGinty. But, their advertising has spawned some classics – from Paula Hamilton in a VW Golf, to that amazing Peugeot 405 ad with blazing fields and a wicked soundtrack. But the clear winner is Honda, whose Impossible Dream film is just plain blooming amazing. Not sure it makes me want to buy a car, but I really want to grow a moustache and ride in a speedboat. Peowww.

Grab a cluster of attractive sports stars, music faces, skater types and DJ legends, then stick them all in head to toe Adidas, have the kind of house party us mortals can only dream about and bung a sweet Frankie Valli remix over the top. I want to buy those trainers, I want to be at that party. Christ, I actually want to BE that pool. Bosh. Win.

Finally, if you want to avoid a stinky carpet – and who doesn’t? – just get some Shake ‘N’ Vac. No instructions required. The original does what it says on the tin brand. You shake it onto your carpet, then you vacuum your carpet. And if this is too complicated, get some crazy dancing woman in a pinny to show you how. By the way, that’s probably someone’s actual mum. It beggars belief.