Do not DARE cross this woman… 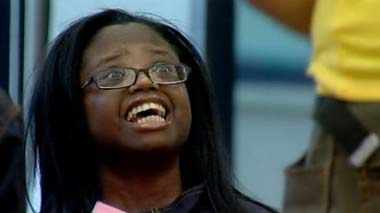 You can learn a lot from watching Big Brother. For example, just last night we learned that Beinazir looks a bit like Boy George during his early Culture Club days, but just as we were becoming dizzy with excitement about that, she was bundled onto a big red bus and driven the hell home. Voters, it seems, were not feeling her, which is a shame, because she seemed quite nice. She even allowed the strange Russian house guest quality time, which is surely akin to doing charity work. Good luck back on Civvy Street, Beinazir.

Elsewhere in the house, Siavash is beginning to resemble Che Guevara auditioning to play Dick Turpin, and the sickly-child-grown-up, Sophia, has taken serious issue with Saffia. For what, we’re not sure. She said something about them having the same name, or Saffia being a bitch. What we do know, however, is that Saffia is coming across very badly – like one of those thin-lipped office cows, who never smile, then spend the weekends becoming outrageously drunk on white wine, and pretending that they’re a bit like Bridget Jones really. They’re not. They’re nothing like Bridget Jones.

Last night also saw Sree – the kindly Indian man – morphing into a tearful young baby kitten, as he realised that he was up for a public vote. “I don’t want to lose my confidence,” he wept in the diary room, in a soft, childlike voice. And lo, thankfully, he survived the early vote. His confidence was alive and well, as he danced in front of the losers, shouting to the gods, praising his own brilliance. What wonderful, attractive confidence. Confidence that must never be destroyed. Might this be the same confidence that will help him steamroller his way through nightclubs in the not too distant future? Yeah, let’s hope he never loses that.