8 new TV shows to look out for…

One could be the next Friends 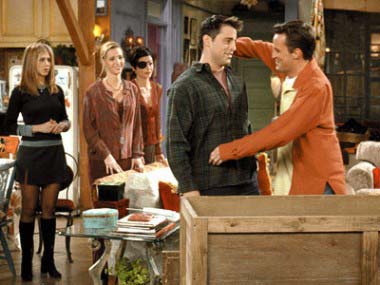 When it first began, Friends was a straight-faced drama serial about a male actor (Joey) on a slow descent into male prostitution, crack cocaine use, and eventually death. It was to be narrated by his widow hooker girlfriend (Monica), with recurring cast members including a dark-eyed drug dealer known only as Phoebs, and a cigar munching heavy called Roz (pronounced Ross). But then, in an intriguing twist of fate, Matthew Perry was cast as a paranoid pipe smoking street urchin with HIV, and the course of the show was changed forever thanks to his totally accidental comedy timing, which seemed to go down well with the live studio audience. The writers assembled on the floor, and seconds later Friends was transformed into a comedy show about six neighbours all passively-aggressively attempting to have sex with one another. A legend was born. Great times, great great times.

Since Friends, we have been forever on the lookout for the next great TV show, so it was with total and complete joy that we heard from friend of the site and comedy expert, Peter, who thought he’d drop by to point out some new shows on the horizon that we should be looking out for. He had these recommendations…

This is a new comedy from two of the Emmy winning writers of the US version of The Office. It stars the great, yet quite tiny, Amy Poehler who recently quit SNL. Here, she is playing the role of a small town official called Leslie Knope. It’s got the same mockumentary style as The Office, and a really good cast as well. The first season was only six episodes, but the word on the street is that they’ve been renewed for a second season.

A comedy starring Danny McBride (a Judd Apatow favourite), Will Ferrell and Adam McKay are behind the show, and it totally rocks. It’s about a professional baseball player who becomes a teacher at his old school, with hilarious results etc. It’s good stuff. It’s been renewed for another season.

I’ve heard lots of good things about Better Off Ted, but I haven’t seen it yet. It’s an office-based comedy, and the creator is one of the guys behind (the now cancelled) My Name Is Earl. Oh, and Portia de Rossi is in it…

Everyone should be totally looking forward to Boldly Going Nowhere – the new comedy from the guys behind It’s Always Sunny in Philadelphia (above). There’s no air date as yet, but there is a leaked script for the pilot floating about the internet…

On the drama front, there’s a new show called The Unusuals, but it has already been cancelled. Still, apparently it’s worth a shot – it had a pretty good cast and was billed as a police detective comedy/drama, which is always a winning combo. Just look at Police Squad.

You must see the second season of Breaking Bad. The first season was absolutely brilliant and won Bryan Cranston (Malcolm‘s dad in Malcolm in The Middle) an Emmy. A struggling high school teacher decides to produce and deal crack to support his family – what’s not to like!

Frustratingly, it’s damn near impossible to find Rob Corddry’s Children’s Hospital comedy anywhere online. It was a webseries shown on the WB networks site… but only to those who live in America. Still, it’s worth looking out for if you can find it. Above is a little interview about the show.

PLUS, friend of the site, Mikey, insists that we should all be watching this:

If you’ve been waiting for a drama about psychotherapy, then here it is, and it’s absolutely great. Each episode centres on a therapy session, and there are something like forty episodes in the first series alone. Lots to catch up on, then.

4 Responses to 8 new TV shows to look out for…