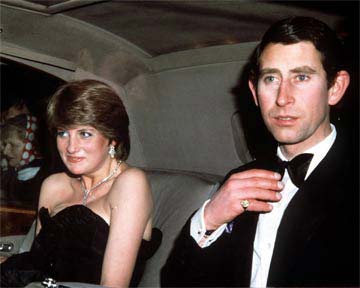 In such cruel financial winters, the only people with spirits that seem undampable are the beaming clipboarders who used their zany personalities to bag a charity job. They’re just so kind and cheerful – standing there, zoning in on you, willing you to look at them. You want to look away, but you can’t. Some of them like to walk along next to you, which makes them seem zanier than the others. It’s just so nice to see enthusiastic young people trying to help the children in Africa, or the blind in Moldova, or the sickly young ones over here, or the welfare of the actual planet. Good for them, good for them. One day we might even stop. But for now, we’re content just to pile our money onto excellent bargains, sometimes in charity shops, sometimes second hand emporiums. Or, in the case of this weekend just gone, sometimes at car boot sales. Wandering around perusing mostly stolen goods, we came across the most glorious Charles and Diana tray from all the way back in 1981, when he was a handsome young Prince with astronomical ears, and she was a simple country girl with hair that mushroomed from her head like a nuclear explosion. In short, we stumbled across a historical artifact. “How much for this magnificent tray?” we demanded, holding the tray up to an old man’s face. “20p” he barked.