Slumming It: The Queen 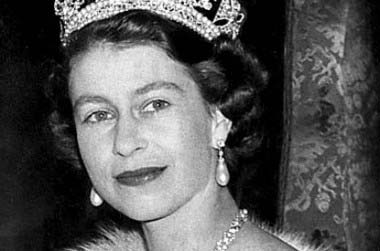 Now that money is pretty much worthless, the class divide is dissolving quicker than a soluble aspirin in an angry ocean. Famous people no longer feel the need to live in large fortresses built into cliff faces, instead they have come down from Fame Mountain to mingle with the rest of us. These days you might see a film star stocking up on mushroom vol-au-vents in Tescos, or perhaps a member of Blur buys his johnnies from the same chemist as you? The point is that celebrities now move among us, and we like nothing more than spotting the things.

This week, we had exactly two reality show sightings – both faces without names from Big Brother. “The one with brown hair,” said our friend David, almost completely uselessly. But these spots were totally blown out of the water by friend of the site Guy, who saw Her Majesty. Her actual Majesty. “I happened to be passing through Windsor last Friday,” he told us, earnestly, “when who should I see just three yards away, but The Queen, she was fairly incognito, and it is her back garden. She’s quite small.”

What an amazing spot. Hence Guy wins this week’s Interestment Mix Tape, featuring Buckingham Nicks, The Beatnuts, and much much more.