Movies setting a bad example No9: The Goonies

Children, turn around, just walk away… 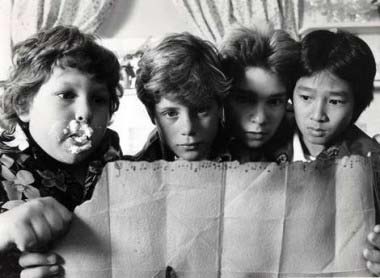 Well, everyone had talked about it, this great new adventure film from America. The Goonies. It sounded so classy, so luxurious, so modern. Children with gadgets in a buccaneering romp – who could ever imagine such a thing? We certainly couldn’t. So it was with enormous anticipation that we sat around with beefburger and cheese sandwiches to watch this masterpiece. We all huddled on the two luxury sofas and one enormous armchair, warming our wintered hands on the excellent central heating system that came with the big family house. And yet, two hours later, everyone was crying, the cousins had been sent home in an ashamed silence, and it may or may not be linked, but nineteen years later, Nan died.

The film, as it turned out, was awash with terrible values, and set such a bad example to children that Mum didn’t let us near the cave in the back garden for eight years. Parents, here’s what your child would learn from this sick, twisted film…

1. If you have a fat friend, encourage him to dance for you. He will mistake the cold rush of humiliation for acceptance amongst his peers. He will then decide to get more fat, as that would obviously make him more hilarious… then he might die.

2. Kids, if you happen across a spooky derelict house, fuck it, go inside! Confront your fears, and ignore those silly things adults have told you about not talking to strangers. Strangers are just friends who haven’t raped/killed you yet. And anyway, look at you – you’re eight, you’re cleverer than most adults, you’ll outwit these guys.

3. Should you happen to have an Oriental child in your gang, persistently ask him about gadgets, because he probably knows a lot about technology. They all do.

4. Should you find yourself locked in a basement with a big ugly monster, don’t worry, befriend the beast. Later on, declare your love for the hideous troll in front of all your friends and family. They will find it hysterical.

5. If the family needs money, go out and STEAL.