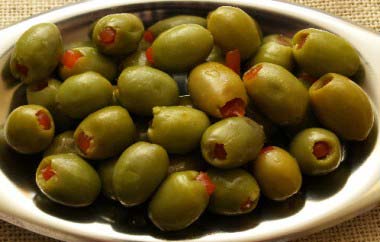 Finally, after years of spraying Right Guard directly into the Ozone Layer, we’ve managed an early start to Summer. Good for us. Time was when April was notoriously rubbish, so bad that even the most demure women-about-town wouldn’t leave the house without a set of Chanel gum boots, and a massive waterproof poncho. But now look at us – bikinis at work, most of your colleagues going commando. It’s boiling. It has also, brilliantly, made for an early start to Picnic Season – by far the most magnificent of all the food-based movements. From now until late August, every single blade of grass in the country will be Pimms-soaked, park bins will be overflowing with discarded salami. Unless, of course, Winter decides to come early this year. Bloody Ozone Layer.

Either way, to celebrate Picnic Season, we have cracked open the Interestment Cook Book, and have compiled lists and recipes so simple that even a cat would know what you’re talking about. Today, delicious olives.

Olives were once disgusting. You must remember that. Small and childlike, you were so used to piling fistfuls of sweets into your mouth, so when this shiny little morsel didn’t erupt with licorice goodness, you came this close to sacking Nanny. She survived by the skin of her teeth. Anyway, the point is that they now make for a brilliant starter to your picnic, so it’s worth getting a few tubs of the things in. We suggest you go for anything Sicilian (ask at the Deli counter), some of those brilliant green stuffed ones with the red pepper in the middle, and some brownish ones with stones in the centre that you can throw at people when you’re drunk.