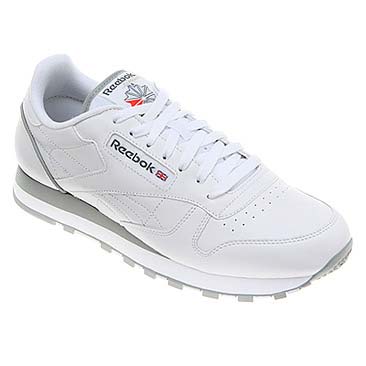 Ahh, the Reebok Classic. Anyone who was burgled in the 1990s will know that the sole leaves one heck of a muddy smudge on the stairs. They were, at that time, the sneaker of choice for young men on the make. And for very good reason – they were stylish enough to impress girls, yet comfortable enough to sprint down a busy high street in, whilst clumsily attempting to balance a portable television on top of a Super Nintendo. We loved them. Now they’re back, but not where you’d expect. This time round, they’ve penetrated the arched-eyebrowed world of ironic fashion – you know, the one where members don fluorescent pink tights and ra-ra skirts, but won’t once smile during an evening out. That world. The one where men are expected to wear leggings. Yeah, there. Anyway, according to great friends of the site and well placed fashion insiders, Matthew and Oliver, the word is that those very same people have claimed the Reebok Classic for themselves, to replace the plimsolls they’ve been in for the last couple of years – and possibly to match up with their yellow-vest-pink-shorts summer combo. Hence, they’re very hot right now. Very hot.